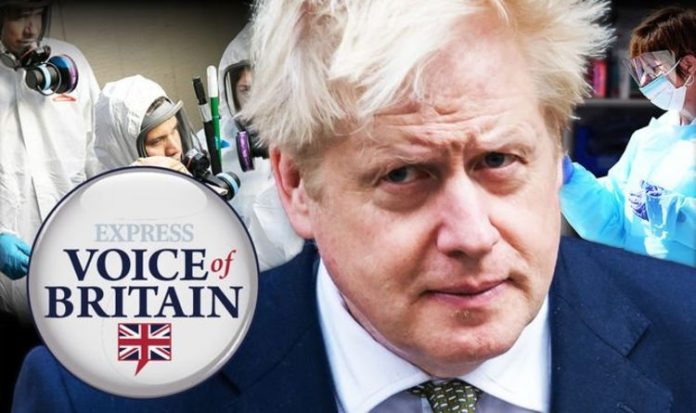 The Scientific Advisory Group for Emergencies (SAGE) recently warned a “circuit breaker” national lockdown could help control the spread of the virus with increasing areas of the country put under stricter lockdown. Today, it was announced areas in the West Midlands, including Birmingham, will be the latest regions to move into Tier 3 restrictions.

Housing Secretary Robert Jenrick said that although COVID rates are in a “bad place in all parts of the country”, the Government still does not want a second national lockdown.

Express.co.uk readers were asked between 4.11pm yesterday and 12.16pm today whether Mr Johnson should follow SAGE advice and enforce a national shutdown.

Out of the 4,607 people people who voted, a majority of 3,180 people (68 percent) said they did not think there should be a second lockdown.

However, 1,363 voters (31 percent) said they did think the UK should enter the toughest restrictions again.

And 64 people (one percent) said they did not know.

People also shared their views online as they rejected calls for another lockdown.

One reader said: “We already know how this goes.

“We have all already seen it and history is repeating itself except this time we really do know how prevalent this disease is.”

Another person added they did not think lockdowns worked.

“Lockdowns aren’t working long term. They bring infections down but once you start opening things up again infections go up and you’re right back to where you started in a couple of months.”

A third person simply added: “Coronavirus measures, such as masks, hand washing and social distancing, actually reduce the spread of flu too.”

The UK recorded 367 new deaths, which was its highest daily death total since May 27.

Mr Jenrick said the Government is taking advice from the scientists “on an almost daily basis”.

But he added there is no plan to enforce anything stricter than the localised tiered approach at the moment.

The Government’s “traffic light” system sees parts of the country placed in different categories, depending on the rates of infection, with tier 3 being the highest as pubs, gyms and casinos could be forced to close.

Mr Jenrick told Sky News: “We don’t want to create a second national lockdown. We know that has some effect on bearing down on the virus but we also know it’s immensely disruptive in other regards to people’s lives and livelihoods and broader health and wellbeing, so we will do everything we can to avoid that situation.”