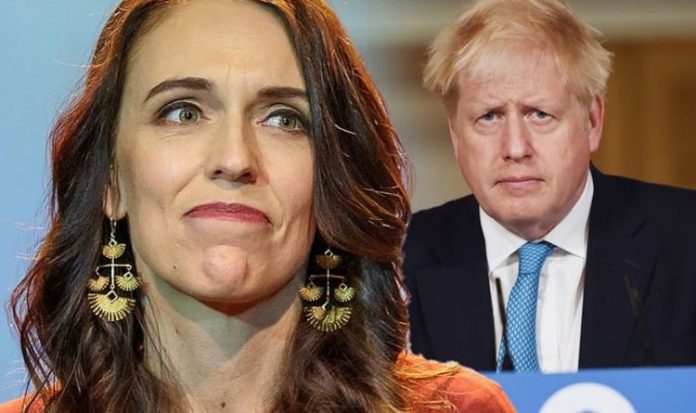 Public Health doctor and epidemiologist Dr Johnny Pearson-Stuttard insisted Boris Johnson and the UK Government could learn from nations like New Zealand regarding coronavirus. While speaking to Kay Burley on Sky News, Dr Pearson-Stuttard argued the country had focussed on two key things to ensure a smooth response to coronavirus. Dr Pearson argued New Zealand had successfully communicated clearly and responded unified across all forms of Government.

This has allowed the country to have very few excess deaths despite the coronavirus pandemic.

Dr Pearson Stuttard said: “One of the interesting things was there were groups of six or seven countries like Bulgaria and New Zealand who have had next to no excess deaths at all.

“In fact, for some of them, they had a couple hundred fewer deaths.

“New Zealand have much higher obesity rates than we do and diabetes rates yet they manage to get the policy response right.”

Dr Pearson-Stuttard noted one of the key reasons New Zealand was able to respond well to the crisis despite the health risks of their population.

He said: “One of the things coming out of that as well was the importance of both a sense of cohesion, that everybody across Government including central and local bought into this together with one united voice.

“The second thing was that communication and clarity of the communication to the public, health service and industry as it is so important during these uncertain times.”

Dr Pearson-Stuttard also outlined the importance of test and trace to ensure there is not a need for a second lockdown.

The epidemiologist also praised the ability for the Government to be targeted in their approach to coronavirus.

He said this was a direct result of having more data on the virus and how it spreads.

He closed by saying: “We have got so much more data from the testing now.

“We are able to be a bit more targeted whether that is regional or occupational specific.

“But ultimately we can get those clues that the virus is increasing much earlier than before.”