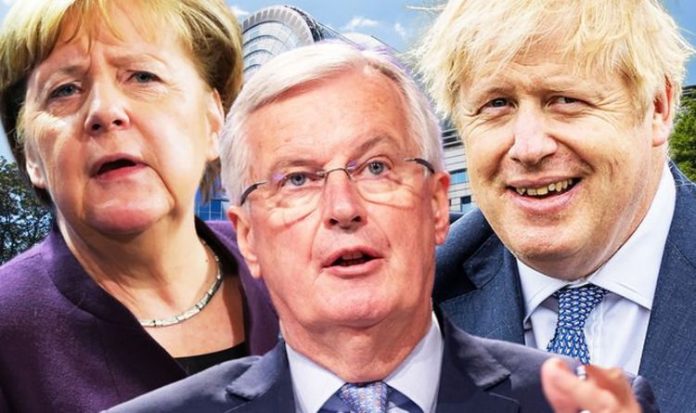 In negotiations, the European side has so far insisted that its vessels continue to enjoy unfettered access to UK waters, even after a post-Brexit transition phase that ends on December 31.

However, Britain wants this access limited significantly and has called for fishing rights in its waters to be renegotiated every year, a demand that according to sources close to the talks, the EU will refuse.

A diplomat said: “Mr Barnier believes the EU must prepare itself for a reduced access to British waters.”

In a recent report for Global Vision UK, the director of the eurosceptic campaign ‘Get Britain Out’ claimed Mr Barnier’s change in behaviour means panic has now set in across the bloc.

Jayne Adye argued Prime Minister Boris Johnson should see this as an opportunity to “really pressure Brussels into accepting our terms”.

She wrote: “Owing to its experience negotiating with former Remain-backing British Prime Ministers – like David Cameron and Theresa May – the EU probably thought it could do the same with Boris Johnson.

“The Government should capitalise on this moment and really pressure Brussels into accepting our terms.

“However, Boris Johnson must make sure he gets Britain out fully and with our reputation fully intact. Even if a trade deal is close and on favourable terms for the UK, we cannot allow the EU to continually bully us and use nasty tactics in the final few months of the negotiations.

“We are on the verge of becoming an independent sovereign nation.