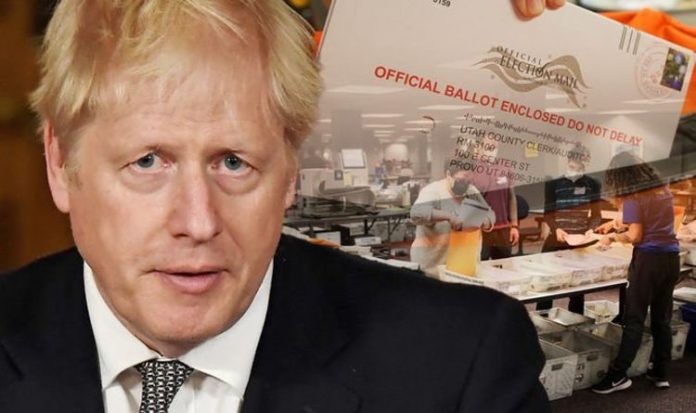 Prime Minister Boris Johnson has been warned not to roll-out voter ID laws, similar to those observed in many US states, following claims of “voter suppression” across America. It comes as the US election hangs in the balance. Incumbent President Donald Trump has already blasted the vote as a “fraud”, claiming victory even before all the results have been announced.

Ten states are yet to declare all their votes.

In the UK, ministers recently confirmed their commitment to introducing mandatory voter ID for elections.

They said they also want the laws to be rolled out across local elections in England and Northern Ireland.

Yet, the calls have been met with decisive opposition, with many highlighting the risks of imposing the policy when millions of Britons lack photo ID.

Darren Hughes, Chief Executive of the Electoral Reform Society, said the laws would be “unfair” and dissuade Britons from participating in the democratic process of elections.

He said: “Strict voter ID laws have been rightly challenged for unfairly locking out large numbers of voters in the US and undermining free and equal access to the ballot box. There are real concerns that these policies are being used as a partisan tool to restrict voter rights and skew the rules against already marginalised groups.

“In the US, as here, it’s a recipe for reducing trust in elections, and deepening the divides in democracy. And yet the UK government wants to import this ‘show your papers’ policy to the UK.

“This election, there’ve been countless cases of problems with strict ID laws in the US, despite little or no evidence of widespread fraud beforehand. This is a dangerous road to go down in Britain. There is simply no case for pulling up the drawbridge to millions of Brits who lack photo ID, and we should heed the lessons from America.”

JUST IN: Boris faces backbench rebellion to get second lockdown thrown out

Those with lower educational qualities and lower incomes also appear to suffer the most.

In the run-up to the US election Mr Trump consistently claimed the vote was fraudulent even before ballots were cast.

Today, he demanded all voting to stop, calling on polling officials not “to find any ballots at 4 o’clock in the morning and add them to the list”.

It came after Democrat Joe Biden urged his supporters to “keep the faith” and wait for the final results amid a showdown in key swing-states.

Voter ID trials have been piloted in the UK in previous elections, with mixed results.

Around 750 people were denied a vote at the May 2019 local and European elections because of the scheme that obliged people to show their ID before being allowed to vote.

The Electoral Commission carried out the research and said the trial, in 10 local authority areas in England, went smoothly overall.

However, Labour said the scale of the issue meant the Government must abandon the scheme.

Around 2,000 people were initially turned away for not having the necessary ID with them, 758 of them not returning to cast their vote.

On a larger nationwide scale, opponents fear the voting process could be hindered should the law come into effect.