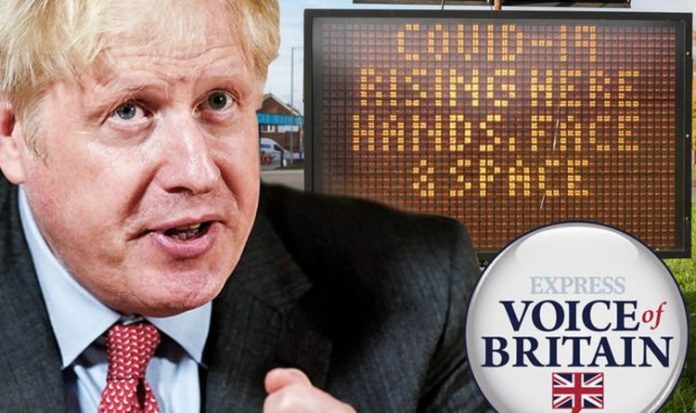 Mr Johnson unveiled the tier system across the country in order to contain local outbreaks in England. However, with confusion surrounding the differing rules for different areas of the country, some have called for the Prime Minister to enforce a nationwide lockdown. Amid the fear over a potential nationwide lockdown coupled with the confusion surrounding the regulations, Express.co.uk asked in our exclusive poll, “Should Boris scrap tier system and put the entire country in full lockdown?”

In response to the poll, 4,273 out of 6,052 voted against Mr Johnson scrapping the tier system and enforcing a full lockdown.

One person said in response: “They should do away with all the lockdowns and concentrate on protecting the vulnerable.

“It’s becoming more apparent from numerous experts that eventually we are going to have to rely on the herd method despite lockdowns. You only have to listen to other world experts on the subject.”

A second said: “Lockdown is causing more damage and death than the virus.

“Power tripping, they are intent to destroy the economy, and enslave us all.”

A third said: “How many more lockdowns would there be, four, five, six?

“It could go on for years. Before too long there will be no economy left, it’s only just ticking along at the moment.”

Coronavirus: The poll called for Boris Johnson to refuse a lockdown (Image: PA)

A fourth said: “The lockdowns didn’t work last time so how is this lockdown going to be any different?”

Under Tier 3 of the Government’s system, people must not socialise with anybody who they do not live with or have formed a support bubble with, in any indoor setting or in any private garden.

Pubs and bars must also close although they can remain open if they operate as a restaurant.

From today, Greater Manchester was placed in Tier 3 while from October 24, Stoke-on-Trent, Slough, Coventry, Barnsley, Doncaster, Rotherham and Sheffield will be moved into the highest level.

Mr Johnson has so far refused to call a nationwide lockdown, while the Opposition has demanded a short circuit-breaker for two to three weeks.

Sir Keir has stated if the UK doesn’t do this, Britain will “sleepwalk into a bleak winter”.

Deputy Chief Medical Officer, professor Jonathan Van-Tam, said in response to those calls: “Pretty much everywhere in England is now heating up to some extent.

“We are trying to walk a very fine line in between getting the virus under control in areas where it is out of control while incurring the minimum amount of economic damage in doing so.

“It is clear that in the areas where it is out of control, hard measures are needed.

“But do I think right now it is appropriate to insist on those similar hard measures in, for example, the South West of England or Kent, where levels of the disease are very, very much lower than in the north of England?