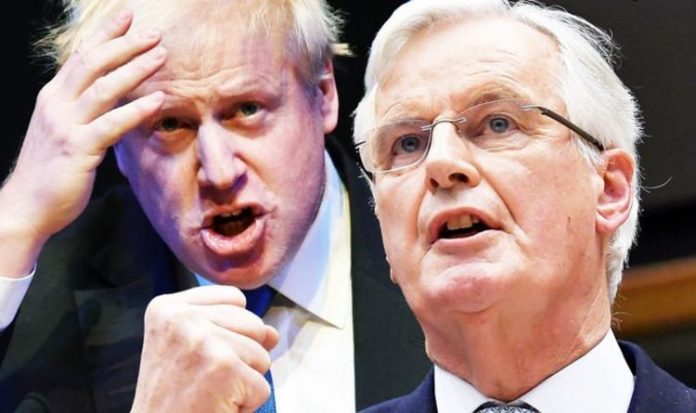 The EU chief negotiator was left furious today about British proposals for fine-turning customs rules. Mr Barnier claimed to be on the brink of walking out of the negotiations on a UK-EU trade in protest at the move, accusing the Prime Minister of ripping up his promise not to allow a hard border in Northern Ireland. But Mr Johnson was standing firm tonight and refused to back down. Their bitter exchanges left the talks – due to resume in London tomorrow – teetering on a knife edge.

The angry row erupted after details of the Government’s Internal Markets Bill emerged. It is being drafted to set out clear customs arrangements if the UK’s transition out of the EU single market at the end of the year takes place without a trade deal agreed with Brussels.

Mr Barnier claimed the proposal undermined protocols in the Withdrawal Agreement signed by the Prime Minister in October meant to uphold the Northern Ireland peace process.

“This protocol is a condition for preserving peace and for protecting the integrity of the single market.

“It’s also a pre-condition for confidence between us because everything that has been signed in the past must be respected,” the Brussels negotiator said.

Mr Barnier’s spokesman suggested the Brussels diplomat will walk away from talks if the UK broke the Withdrawal Agreement commitments.

“While we are determined to reach an agreement with the UK, the EU will be ready in the event of a no-deal scenario to trade with the UK on World Trade Organisation terms as of January 1,” the spokesman said.

Brexit row: Michel Barnier is threatening to walk out of talks (Image: GETTY)

Other senior EU figures expressed outrage at the British move.

Bernd Lange, chairman of the European Parliament’s trade committee, said: “I’m shocked. That’s not how you deal with negotiating partners. I haven’t seen anything like it in decades.”

He added: “We will not allow ourselves to be blackmailed. There were signs that the joint political declaration for Boris Johnson was not worth the paper it was on. Now he’s said it.

“Boris Johnson is thus turning the negotiations up to now and the serious efforts of the European Union into a farce.”

European Commission President Ursula von der Leyen insisted that sticking to the Withdrawal Agreement promises was a “prerequisite” for agreeing a trade deal.

“I trust the British Government to implement the Withdrawal Agreement, an obligation under international law and a prerequisite for any future partnership,” she said.

And one EU diplomat said: “If they undermine the Withdrawal Agreement while we are still negotiating our future partnership it would be blatantly clear a contract signed by the UK Government is not worth the paper it is written on.

“Undermining an international treaty would reverberate beyond the negotiations for years to come. It would do undue damage to the UK and cripple them as a contracting partner.

Boris Johnson has upset the EU with his ultimatum (Image: GETTY)

“If the UK is going full North Korea mode, into isolation, then this fits the pattern. But I cannot see global Britain pursuing this route, which is incomprehensible given the kind of country it is and aspires to be – let’s wait and see.”

Another EU diplomat branded the move “desperate and ultimately a self-defeating strategy.”

But Whitehall officials yesterday insisted the Internal Market Bill, due to be published in Parliament this Wednesday, was needed to “clarify” customs rules in the event of a no-deal Brexit.

They insisted the legislation, designed to ensure the free flow of goods between the four parts of the UK, would not undermine Northern Ireland guarantees.

One UK official said: “The Government is completely committed, as it always has been, to implementing the Northern Ireland Protocol in good faith.

“If we don’t take these steps we face the prospect of legal confusion at the end of the year and potentially extremely damaging defaults, including tariffs on goods moving from Great Britain to Northern Ireland.

“We are making minor clarifications in extremely specific areas to ensure that, as we implement the protocol, we are doing so in a way that allows ministers to always uphold and protect the Good Friday peace agreement.”

A Number 10 spokesman said the Prime Minister would press ahead with the legislation.

He said: “We will continue to work with the EU in the Joint Committee to resolve outstanding issues with the Northern Ireland Protocol.

“However, as a responsible Government, we cannot allow the peace process or the UK’s internal market to inadvertently be compromised by unintended consequences of the protocol.

READ  IPO Board commitment to creating an inclusive working environment

“The Northern Ireland Protocol was designed as a way of implementing the needs of our exit from the EU in a way that worked for Northern Ireland and in particular for maintaining the Belfast (Good Friday) Agreement, the gains of the Peace Process, and the delicate balance between both communities’ interests.

“It explicitly depends on the consent of the people of Northern Ireland for its continued existence.  As we implement the Northern Ireland Protocol this overriding need must be kept in mind.

“So we are taking limited and reasonable steps to clarify specific elements of the Northern Ireland Protocol in domestic law to remove any ambiguity and to ensure the government is always able to deliver on its commitments to the people of Northern Ireland.

“These limited clarifications deliver on the commitments the Government made in the General Election manifesto, which said ‘We will ensure that Northern Ireland’s businesses and producers enjoy unfettered access to the rest of the UK and that in the implementation of our Brexit deal, we maintain and strengthen the integrity and smooth operation of our internal market.’ This was reiterated in the Command Paper published in May.”

Mr Johnson’s spokesman yesterday insisted the Prime Minister wanted to “work hard” for a trade deal but was confident the UK will “flourish” even if the talks fail.

“We continue to work hard to secure a deal and do hope that is possible.

“The only thing we are absolutely clear of is the need to deliver on the promise of the referendum and to move forward as an independent, sovereign country.

“In the event we leave with an Australian-style trading relationship that will allow us to do that.

“We will have full control over our laws, our rules, our fishing waters and we will have the freedom to do trade deals with every country in the world.

“If we leave with an Australian-style trading relationship, he is absolutely confident we will flourish, the spokesman said.

In a phone call to Paris yesterday, Mr Johnson told French President Emmanuel Macron of the urgent need to conclude the trade talks.

DON’T MISS
Michel Barnier could ‘walk out’ of crunch Brexit talks with Frost [INSIGHT]
EU can maintain legal hold on UK as Johnson seeks help from Ireland [PLOT]
Brexit latest: What is going on with Brexit right now? [ANALYSIS]

Brexit row: The fall-out has left the likes of Angela Merkel on edge (Image: GETTY)

Boris Johnson has caused chaos within the EU over the declaration (Image: GETTY)

But France’s European affairs minister Clement Beaune warned there was a “high risk” of no deal.

“We are negotiating to avoid a no deal, we still have time to find an agreement. It’s for the UK to move,” Mr Beaune said.

“We will accelerate in the very next few days on the French side, and in coordination with our EU partners, the preparation in case of a no deal.”

Ahead of today’s eighth round of talks, Mr Johnson’s Brexit negotiator Lord Frost said: “Today, I will sit down with Michel Barnier and drive home our clear message that we must make progress this week if we are to reach an agreement in time.

“We have now been talking for six months and can no longer afford to go over well-trodden ground. We need to see more realism from the EU about our status as an independent country.

“As we have done from the beginning in public and in private, I will reinforce our simple, reasonable request for a free trade agreement based on those the EU has signed before with like-minded partners.

“Throughout, we have listened carefully to our EU counterparts, signalled flexibility where possible to move the talks forward, and tabled new proposals to make progress. But we have repeatedly made clear that key elements of our position derive from the fundamentals of being a sovereign state, and it’s time for the EU to fully recognise this reality.

“If they can’t do that in the very limited time, we have left then we will be trading on terms like those the EU has with Australia, and we are ramping up our preparations for the end of the year.

“There is still time to reach a good agreement and I look forward to this week’s face-to-face negotiations where I hope progress can be made.”