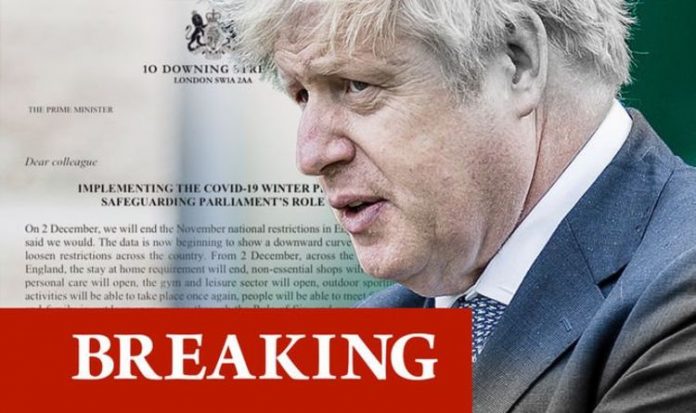 As England is preparing to come out of its second national lockdown on December 2, MPs are expected to vote on the tiered approach outlined by Mr Johnson and Health Secretary Matt Hancock earlier this week. More than 99 percent of the country will be in the two highest tiers.

The new tier system has been widely criticised by MPs and members of the public, with many claiming they are now in a higher tier than before the lockdown four weeks ago.

But now in a lengthy letter to MPs, the Prime Minister has outlined his COVID-19 Winter Plan while the country awaits for the vaccine to be deployed.

Mr Johnson said: “The previous tired system had an impact on viral transmission but SAGE advised that stronger measures would be needed to prevent the epidemic from growing.

“The analysis shows that in general tier 1 measures were not able to stop the growth of the virus, tier 2 managed to slow but not reverse the pace of growth and tier 3 managed to get cases falling in most, but not all, areas.”

Mr Johnson goes on to make six “clear commitments” for colleagues ahead of the crucial Commons vote.

He confirmed Parliament will have the “opportunity to confirm its support for these measures after we review their impact at the end of January”.

The Prime Minister also said there will be an opportunity to “review all tier allocations at the first review point” on December 16.

Regions will also be reviewed on the positivity rate and the pressure on the NHS.

Mr Johnson announced he will be charging a Cabinet committee on December 17 which will take the “final decision on the tier allocations”.

He warned: “These will not be easy decisions.

“With Christmas round the corner, and the difficult months of January and February ahead of us, we will need to continue to exercise caution.

“However, where we have robust evidence that the disease is in sustained decline, particularly in those tier 3 areas that are already showing marked improvement, and that case rates are low enough to allow lighter restrictions, areas will be moved down.”