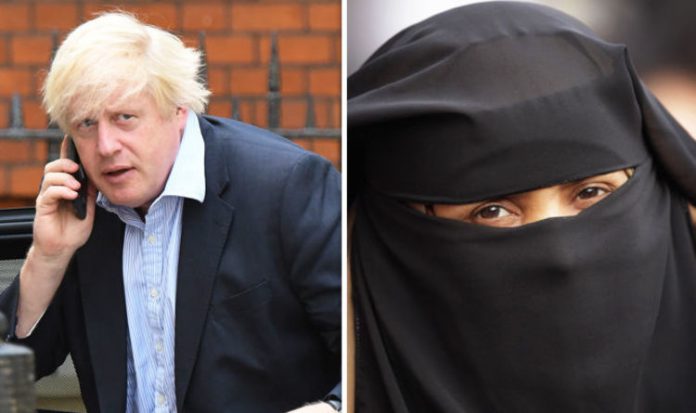 The Conservative Party was plunged into a major row over the comments as Tory officials threatened disciplinary action against the MP.

But his father Stanley leaped to Mr Johnson’s defence, saying his son’s outspoken remarks on the garment were “spot-on”.

He even said the article should have been stronger by calling for an outright ban on the burka.

He said: “Yes, Boris used some colourful language. That’s called ‘freedom of speech’ or it was in my day.

“But he said what needed to be said. As a matter of fact, I would have liked him to have gone a bit further.

“He was against ‘banning the burka’. But surely, there are circumstances where a ban or appropriate restrictions would be in order.

“Shouldn’t female school-teachers, nurses or doctors be seen as well as heard?

“At least, the House of Commons could have a sensible debate on this issue.”

Stanley Johnson said support for his son’s views was “near-universal” among people he had spoken to in Somerset, where he lives.

He added: “Why the all furore? Why has this disastrous ‘blue-on-blue’ warfare broken out?

“The Chairman of the Conservative Party is setting up a Committee of Enquiry into whether Boris’s use of the word ‘letter box’ breaches party rules.

“If that isn’t an own-goal, I don’t know what is. Mr Corbyn must be rubbing his hands with glee.”

The row erupted on Monday when Mr Johnson’s article on the burka was published in the Daily Telegraph.

The Brexiteer MP and former London Mayor said he was opposed to Demark’s recent ban on women wearing the burka in public places.

But he added that it is “absolutely ridiculous that people should choose to go around looking like letter boxes”.

Theresa May and Tory chairman Brandon Lewis both ordered him to apologise for the remarks, but he has failed to do so.

Miqdaad Versi, the assistant secretary general of the Muslim Council of Britain, said Mr Johnson was “pandering to the far right”.

And the Tory MP was reported to the Equality and Human Rights Commission by Labour backbencher Jess Phillips.