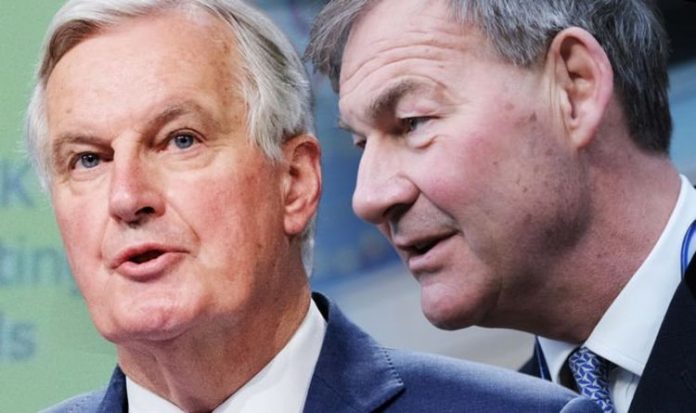 Mr Lowe was speaking after Michel Barnier, the EU’s chief Brexit negotiator, stressed the UK would have to allow fishing vessels from EU countries access to British waters after the end of the year in order to secure an agreement. Speaking in Brussels yesterday, Mr Barnier said: “There will be no trade agreement between the UK and EU without a sustainable agreement on fisheries.”

The issue of fishing rights is seen as a major sticking point – and given the staunch backing fishermen gave to the Leave campaign four years ago, and ever since, Brexiteers are watching the situation closely.

Mr Lowe, the former chairman of Southampton FC, told Express.co.uk: “I simply do not know where this is headed.

“We’ve been let down so many times. I have this saying, watch what the hands are doing, not what the mouth is saying.

“We have got to the stage where all of these lightweight people in Government say things but they are doing something completely different.

“At the end of the day I don’t know how these people think but what I do know is there is still room if we are not careful for them to cave in on fishing.”

He explained: “In the last 24 hours Michel Barnier is now talking about us having sovereignty over our waters but not necessarily over our fish.

“Does that mean some deal is about to be done?

READ MORE: Kim Jong-un ‘will kill ANYONE he sees as a threat – even his sister’

“These people are not very strong – they have not got the agenda of the British people at the top, their careers are.

“They are not like Lord Salisbury who always put the British people at the top of his agenda.

“These are grubby career politicians who put their careers above everything else.

“Compromise is in their blood isn’t it?”

Mr Lowe also offered a withering assessment of the way in which negotiations had unfolded since the 2016 referendum.

Explaining his decision to stand for the Brexit Party last year, he said: “I could not just watch Theresa May’s absolute catastrophe of a Government march us over a cliff.

“I have to give some credit to David Frost – thus far he has stood his ground.

“We have a massive trade deficit with Europe, so we hold all the cards.

“So it is a nonsense for Michel Barnier, who I have met, to be dictating terms to us.

“We should not fear no deal, it’s the best deal for us if they won’t do a sensible deal, which they are responsible politicians they should be doing for 500 million European citizens they represent.