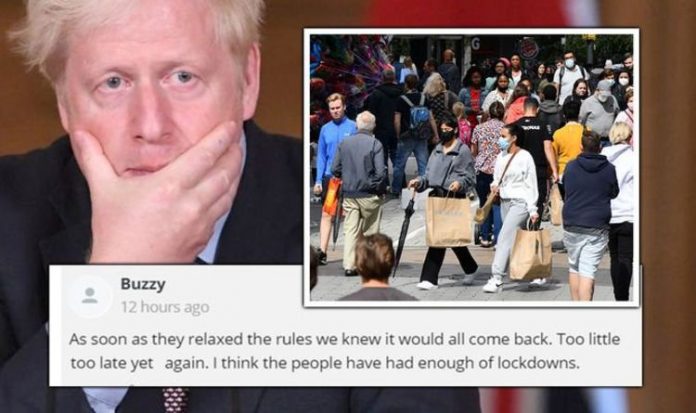 Two-thirds of Express.co.uk readers who took part in a survey said the Prime Minister should not implement another nationwide lockdown, with many arguing he would find it difficult to justify such drastic action due to the hammered economy. At a Downing Street press conference on Wednesday Mr Johnson unveiled new rules which ban social gatherings of more than six people, insisting they are aimed at averting a second lockdown.

When asked if the Prime Minister should go one step further and introduce a full lockdown, 66 percent (2,548) of readers in an Express.co.uk poll said no.

Thirty-two percent (1,294) said the recent spike in infections should result in a second shutdown.

Only two percent (12) of respondents said they were unsure.

In comments, readers laid out their arguments, with many saying the heavy blow the first lockdown served on the economy is a warning to ministers not to go down the same route again.

One man said it remains “highly questionable” whether the first lockdown could be justified at all.

He wrote: “The damage it has caused and lack of any real evidence to indicate it has been in any way effective at preventing the spread should be precluding any thoughts of re-introducing it.”

Another person said the lockdown ordered in March had a “built-in fear factor that helped the Government gain compliance from the population”.

They warned that as fears of the virus have slowly eroded, people would not abide by a second shutdown so diligently.

Others said there would be “no point” in the Government ordering another lockdown as people would “take no notice of it” and carry on socialising and mixing as normal.

They added: “Better to get the country back to work and those that need to protect themselves semi self-isolate.”

From Monday, gatherings of more than six people will be banned in England.

The rule applies to meetings both outdoors and indoors, in people’s homes as well as public venues.

The Prime Minister said “COVID-secure marshals” would be sent out to patrol streets to ensure the measures are being respected.