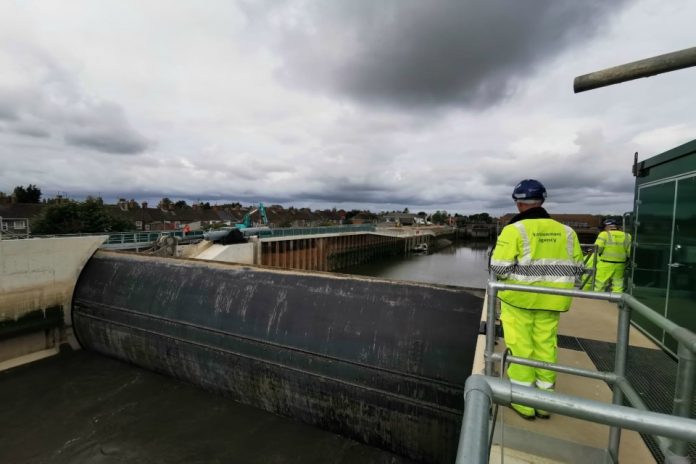 The Boston Barrier gate is now fully ready and working to give an enhanced level of flood protection to over 13,000 homes and businesses in the town.

As the centrepiece of the flood scheme, the barrier gate can be raised in just 20 minutes, responding quickly to threats of North Sea tidal surges.

With the whole of the £100m Environment Agency scheme now two-thirds complete, the project will provide Boston with one of the best standards of flood defence outside of London. Once the scheme is fully completed in 2022, flood risk to over 14,000 homes and 800 businesses will be greatly reduced and allow for the effects of climate change for the next 100 years.

This barrier is part of the government’s long term investment in flood and coastal defences. Since 2015 it has invested £2.6bn to better protect the country from flooding and coastal erosion and is on course to have better protected 300,000 homes by March 2021. Earlier this year, the government announced a record £5.2 billion investment in flood and coastal defences and the National FCRM Strategy will help build a better prepared and more resilient nation.

The Boston Barrier project is expected to be fully completed in 2022.

Flooding has a devastating impact on lives and livelihoods, but for communities like Boston the barrier project brings a real sense of support for the years ahead, better protecting 13,000 properties.

We are determined to support flood-hit communities as we build back greener and we are investing a further £5.2 billion over the next six years to reduce flood risk to hundreds of thousands more homes.

Reaching this stage of the Boston Barrier project represents a huge development for the town and for the Environment Agency.

During this most difficult of years, I want to thank all of the teams who have shown great dedication and determination to reach this important milestone in a Covid-secure way.

Now that the barrier gate is fully operational, Boston is better prepared for what winter may bring, this year and for many years to come.

This marks a huge leap forward for the scheme and there is now a significant reduction to the risk from tidal flooding in Boston. The majority of properties covered by the scheme will be better protected for a similar event to that of December 2013.

Work on the scheme, which has been identified by government as critical infrastructure, continues in line with the government’s coronavirus advice with measures in place to ensure safe working procedures on site.

Our team have worked incredibly hard throughout the pandemic to minimise disruption while maintaining the health and safety of staff, suppliers and members of the public. That effort has definitely paid off and means we now have a winter-ready operational tidal flood defence.

The next stages of work will focus on tying-in the further parts of the scheme downstream, including: