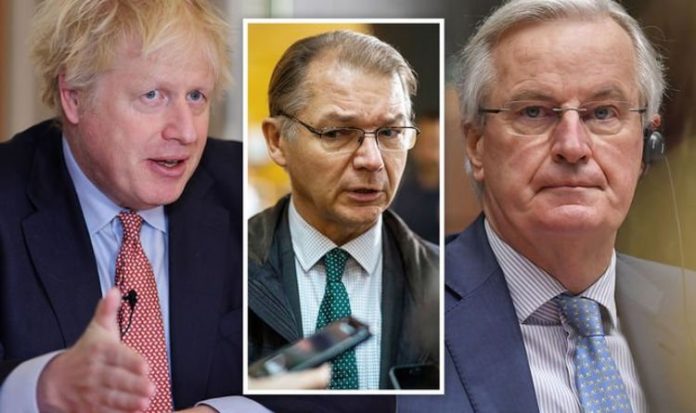 Mr Lamberts, a Belgian MEP and Co President of the Greens in the European Parliament hit out at the UK Government for its attempts to change the withdrawal agreement. The Internal Market Bill aims to give the Government powers to make modifications to the Northern Ireland protocol despite it having been agreed when the UK left the EU in January. The Government has admitted this breaks international law as Brussels launches legal action. Mr Lamberts told Express.co.uk this is a “betrayal” of Conservative Party values.

He said: “Frankly what disappoints me most, is that by and large the Conservative Party has been taken over by the Brexiteers.

“It’s stronger than disappointment, to see the Tories advocating the UK not respecting its signature regarding a treaty.

“Of all parties, the Tories saying ‘we signed something but we might as well not respect it’.

“And also the same party disputing the separation of powers, the authority of the judiciary, I find this to be a betrayal of the spirit of the Tory party.

“I have been working with Tory members in the European Parliament, I respect many of them, but the Tory party I now see in the UK is not the Tory Party I know.

“It is an English nationalist party that has been hijacked by the methods of people like Nigel Farage, and this has nothing to do with democracy.”

A member of the Brexit Steering Group, which coordinates the European Parliament’s deliberations, considerations and resolutions on the UK’s withdrawal from the EU, Mr Lamberts also questioned Boris Johnson’s political motives.

He accused the Prime Minister of being the “ultimate opportunist”.