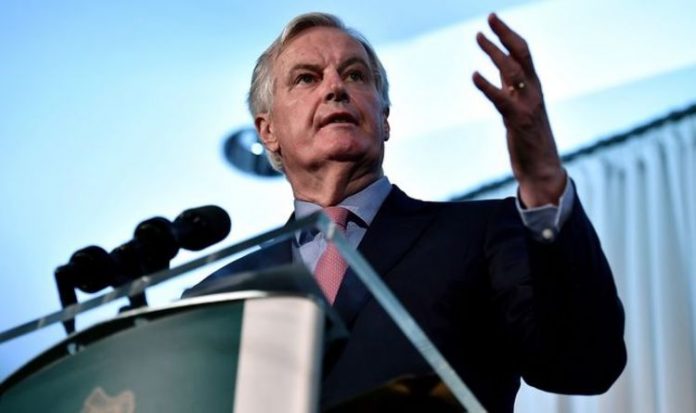 Leaders are due to meet remotely next Thursday to iron out the remaining stumbling blocks. These include disagreements over workers’ rights and environmental protection, as well as state aid rules.

The latter point – referred to as ‘level playing field’ regulations – has remained an area of dispute for months.

A UK government source has told The Times: “We have a different view from the EU on what is appropriate on level playing field issues.

“What we can’t agree to are arrangements which would require us to operate systems of laws equivalent to the EU’s and make us pay a penalty if we moved away from them.”

A spokesman for Prime Minister Boris Johnson said “time is in short supply”.

READ  What are the nine cohorts for the Covid vaccine? (Reports)

The deadline for a post-Brexit trade agreement between the EU and the UK is January 1 2021.

If an agreement is not in place by then, Britain will exit the EU without a trade deal and will operate under World Trade Organisation rules with its continental neighbour.

READ: Northern Irish firms stockpile fearing being cut off from UK after Brexit

However, the Prime Minister stopped short of officially walking away from the table.

She tweeted: “The EU continues to work for a deal, but not at any price.”

He warned that reaching a deal now would be “very difficult” but added a no-deal scenario would be “in nobody’s interests”.

Trading with the EU on WTO rules would lead to tariffs being slapped onto many imports and exports, which analysts say could raise prices for businesses and consumers.

Jonathan Blake, political correspondent for the BBC, has claimed “nobody expects the talks to continue beyond next week”.

The time pressure comes amid a row between the government and the House of Lords over the controversial Internal Markets Bill.

The bill would allow the UK to overrule parts of the Brexit agreement it has already agreed with the EU – something critics fear would break international law.

However, the bill suffered an overwhelming defeat in the House of Lords this week after peers voted 433 to 165 to remove the contentious sections.

A spokesman for the government said it would attempt to get the clauses put back into the bill in December.

He added: “We expect the House of Lords to recognise that we have an obligation to the people of Northern Ireland to make sure they continue to have unfettered access to the UK under all circumstances.”