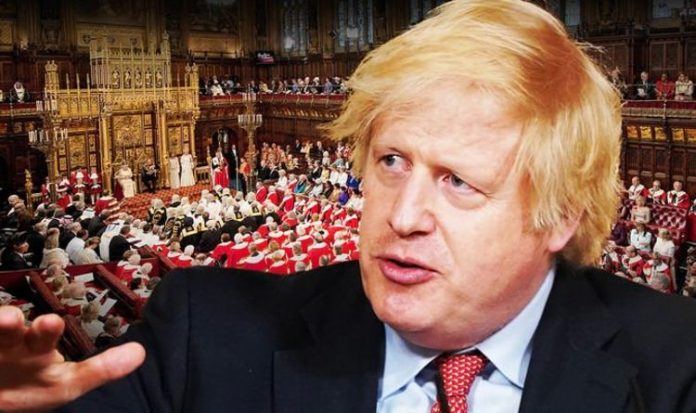 The Government’s flagship immigration bill that would end freedom of movement rules in the UK after Brexit has been defeated in the Lords on three occasions. The proposed legislation, which aims to introduce a points-based immigration system and give the UK more power over its borders, has passed its initial stages in the Commons – where Prime Minister Boris Johnson has a majority of 80. However, peers backed Labour’s demand for an independent review into the impact of the changes to social care, after warnings that the bill would deter low-skilled workers, which would include care workers.

The Lords also voted by 312 votes to 223, majority 89, to block the imposition of financial restrictions on Britons returning to the UK with their EU families from March 2022.

An amendment, proposed by refugee campaigner and Labour peer Lord Dubs, to give EU children in care and care leavers automatic and indefinite leave to remain was supported by 323 votes to 227, majority 96.

These amendments mean the flagship bill faces a legislative tussle, known as parliamentary ping pong, where it bounces between MPs and peers.

It is not the first time the upper chamber has attempted to derail the Government’s Brexit plans, though.

Since the 2016 EU referendum, the Lords have sided with Brussels on more than one occasion.

As a result of the decision of the Supreme Court on January 24, 2017 in the judicial review case of R (Miller) v Secretary of State for Exiting the European Union, former Prime Minister Theresa May published the EU Notification of Withdrawal Bill.

Mrs May was seeking the power to give to the Council of the European Union the formal notice – required by Article 50 of the Treaty on European Union – for starting negotiations for the UK’s withdrawal from the bloc.

The bill passed the Commons with a thumping majority but faced a lot of opposition in the Lords, particularly from Lib Dem peers.

Baroness Nicholson, an eminent Tory peer who defected from the Liberal Democrats, pleaded with her former colleagues to avoid a “cheap political stunt” by trying to delay Brexit.

The Baroness accused peers who were trying to slow down the bill of “disrespect” to the “ordinary people” who voted in the referendum to leave the European Union.

Her appeal to Remainers came as Lord Hope, the convenor of the cross-bench peers, admitted he did not know how they would have voted on amendments which threatened to frustrate the start of Brexit.

JUST IN: Furious Italexit campaigner lashes out at EU

Lib Dems believed they needed the support of just 20 cross-bench peers to force their amendments through.

“To my former colleagues I say this – don’t dishonour your democratic principles because you disagree with the outcome of the referendum. Don’t limit our country’s chances of success outside the EU in a cheap political stunt. Don’t wreck this bill.”

She noted any attempts by the Lib Dems to delay Brexit would not have harmed the House of Lords but would have “destroyed” her old party.

The peer defected back to the Conservatives in 2016 after 21 years as a Lib Dem.

Baroness Nicholson concluded in her piece for The Telegraph: “The bill now before the House of Lords is a simple, straightforward Bill. It is not about whether or not the UK should leave the EU. That decision has already been made.

“It’s time to get on with it – give the Prime Minister the power to trigger Article 50 so we can leave the EU and build an independent, self-governing, global Britain.”

Despite the Baroness’ plea, Dick Newby, the Lib Dem leader in the Lords, claimed he had “support on all sides” for a rerun of the historic EU referendum.

Labour’s Peter Hain also urged Mrs May to “bring it on” while another Labour peer revealed they would “find a way to get the Lords behind us to push the Bill back to the Commons for another go at changing it”.

However, former Cabinet Minister Iain Duncan Smith warned the peers not to “get all puffed up”.

The Brexiteer added: “They are a reviewing chamber, but there is nothing to review here.

Soon after Mr Duncan Smith’s statement, a Government source hit out: “If the Lords don’t want to face an overwhelming public call to be abolished, they must get on and protect democracy and pass this Bill.”

Downing Street, though, called for peace, saying it was right that the Lords reviewed the Bill and distanced Mrs May from any threats of abolition.

Yet, No 10 insisted that the former Prime Minister wanted to see the Bill pass in time for her to trigger Article 50 by the end of March.

After weeks of parliamentary ping-pong, the House of Commons overturned the Lords’ amendments and the Bill finally passed on March 13.