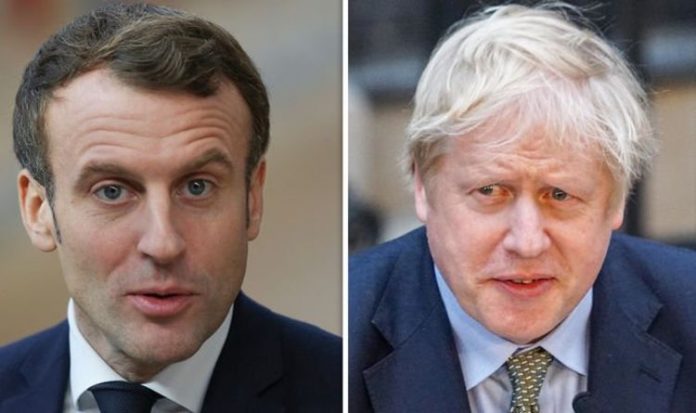 French President Emmanuel Macron has recently been particularly intransigent with Brexit Britain. According to senior political sources, because the French leader is facing domestic threats to his re-election, he would rather see the talks fail than agree to a bad deal that could tempt other EU states to leave the bloc. Europe’s power to protect itself from major global rivals, pandemics, economic crises, migration and climate change will be a major electoral argument for Mr Macron as he readies for his 2022 re-election bid, most likely against National Rally leader Marine Le Pen, who he defeated in 2017.

A source said: “France’s stance is to show that Brexit cannot be a success.

“From that point of view, the prospect of no deal is not necessarily a problem.”

Now that the two sides are said to be on the verge of striking a deal, it is not clear what Mr Macron’s position is on the agreement.

As tensions are set to rise in the coming hours, unearthed reports shed light on a plan devised by the French leader in 2017, that would have seen Britain returning to a “transformed” Europe after Brexit.

In an impassioned, hour-and-a-half long speech at Paris’ prestigious Sorbonne University three years ago, Mr Macron outlined his vision for a “profound transformation” of the EU, unveiling a series of proposals to deepen the bloc politically and harmonise rules across the continent.

Calling for a more effective, less bureaucratic EU, Mr Macron said: “In a few years, if it so wishes, Britain could regain its place in the EU.

“The Europe that we know is too weak, too slow, too inefficient.

“But Europe alone can give us the ability to act in the world faced with big contemporary challenges.”

While he insisted that discussions on Brexit could not themselves “define the future of Europe”, he said: “In this revamped, simplified European Union I can’t imagine that Britain could not find its place.”

The prospect would become all the more realistic, he argued, thanks to the creation of a “Group for European re-foundation” of willing EU members states that wish to forge ahead with greater integration.

The Commission, he added, could be reduced to 15 members and this “greater differentiation” would make it easier for countries like Britain to join the club at their own pace.

During his first meeting with former Prime Minister Theresa May in May, 2017, Mr Macron had already suggested that Britain could have rowed back on its referendum decision to quit the 28-member bloc.

He said: “Of course, the door is always open as long as the negotiations on Brexit have not finished.”

During his speech, the French President took a swipe at staging referendums, such as the UK’s one on EU membership, saying: “We mustn’t fall into the trap of the populists and extremists which consists of saying, ‘Let’s pose directly the question yes or no in a simplistic way, the response is always no’.”

He also said that Britain’s political class had “lost the people” on Europe by failing to defend it as an idea, and simply selling it as a competitive space.

His proposals for a post-Brexit shake-up included plans to give the 19-member eurozone a finance minister and the European Parliament a “strong” budget.

Mr Macron also placed much emphasis on security calling for a European “joint intervention force, a common defence budget and a joint doctrine for action” by the start of the next decade.

He even raised the prospect of major changes to the Common Agricultural Policy, the EU’s giant farm subsidy programme, which has historically been defended by France and its powerful agricultural lobbies.

The concept of a “two-speed” or “multi-speed” Europe is not new, but has been debated for years in Brussels as a way to solve some institutional issues.

The points, among which Mr Juncker expressed no preference, “range from standing down from policing of government financing of companies, for example, to a broader pullback that would essentially strip the EU back to being merely a single market”, according to one report.

The updated possibilities would entail member states or groups of countries adopting different levels of participation with the union.

The European Commission was approaching a March meeting of the 27 members in Rome and Mr Juncker’s paper addressed the options that “once invited scorn from convinced Europhiles” and seemed maybe even to have some backing “of lifelong federalists” like the President.

Despite receiving backing, the idea was later dropped.