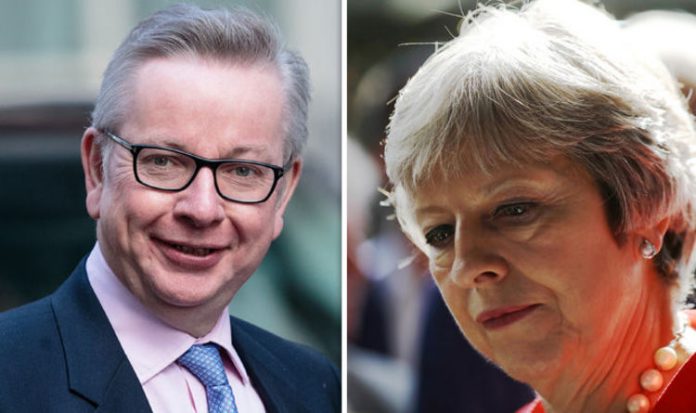 Brexit campaigner Mr Gove was talking with Tory MPs and peers at a dinner when the Conservative MP raised the scenario where the UK would remain in the European Economic Area (EEA), like Norway, so they could avoid the chaos of a disorderly ‘no deal’ exit.

The cabinet minister was speaking at a private dinner of the Green Chip group, which was set up in support of David Cameron during his time as Prime Minister, with about 20 Tory MPs and peers on June 25.

According to the Financial Times, one MP at the dinner said: “He was steering the conversation towards the EEA idea.

“There’s no doubt about that.”

Mr Gove has publicly insisted the UK should focus on leaving the EU next March and try to secure a better Brexit deal over the next few years.

And one of Mr Gove’s allies leapt to his defence, insisting: “He wasn’t advocating the EEA.

“He’s totally behind the prime minister’s Chequers strategy. He’s not considering any other option. He likes discussing things.”

Tory Eurosceptics will be enraged by the backing of a Norway-style Brexit, who would see it as crossing Theresa May’s red lines.

It comes as top Tories are continually raising the prospect of a no deal scenario.

Foreign Secretary Jeremy Hunt has said it is increasingly likely the UK will leave the EU without any deal as Mrs May has cut short her summer holiday to Italy to discuss options with President Emmanuel Macron tomorrow.

Mrs May has ruled out EEA membership saying that a Norway-style relationship with the EU would cross her red lines relating to free movement, EU budget contributions and the European Court of Justice.

The dinner took place before Mr Gove backed Theresa May’s Chequers plan, which aimed for close customs ties with the EU to avoid trade disruption and a hard border in Northern Ireland.

In July Nicola Sturgeon declared it is “game on” for campaigners hoping to keep the UK in the single market and the customs union after Brexit.

And the Remain campaign has warned the EU not to offer Theresa May a ‘Brexit fudge’ which would mean that many of the deals would be negotiated after the UK has legally left the bloc as they fear this would be even worse than a no deal exit.