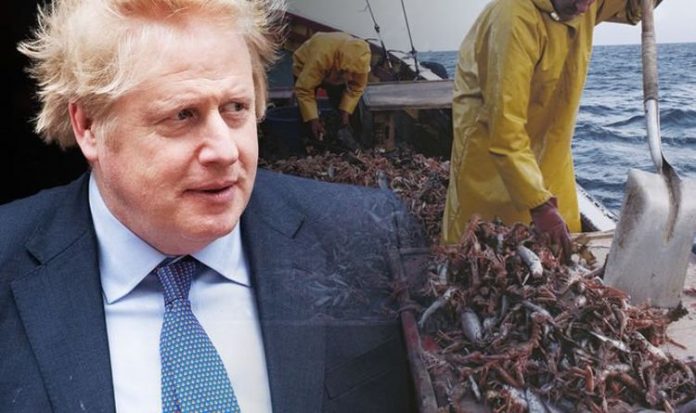 Last week, the EU told British fishermen they face being indefinitely banned from exporting live mussels, oysters, clams, cockles and scallops from UK waters because it is now a third country. Countries which don’t meet the EU’s standards have to purify their catch domestically before exporting. The process adds significant costs and delays and is particularly impacting fishermen in Wales and the south west of England.

However, the Government argues the EU’s move contradicts previous assurances that the temporary measure would end in April, with George Eustice, the Environment Secretary, arguing there is nothing in the regulations to prevent trade from continuing.

Mr Eustice said the ban was “quite unexpected and really indefensible”, telling BBC Radio 4’s Today programme: “The truth is, there is no legal barrier to this trade continuing, both on animal health grounds and on public health grounds – there is legal provision within existing EU regulations to allow such trade to continue from the UK.

“We are just asking the EU to abide by their existing regulations and not to seek to change them.”

Last night, Prime Minister Boris Johnson also refused to rule out a trade war with Brussels if it didn’t back down on its ban.

It appears, though, that Britain was fully aware of the restrictions, having voted for them in 2008.

Lib Dem North Somerset Councillor for Blagdon and Churchill Patrick Keating wrote on Twitter: “The ‘ban’ on the import of live molluscs is not specifically targeted at the UK as some sort of ‘Brexit revenge’.

“The reality is that these restrictions apply to the import of aquaculture products from every non-EU country, as per Reg. No 1251/2008.

“This particular piece of legislation dates from 2008 – when the UK was a member state, and had votes in Council and Parliament.

“So, expressions of surprise that there are rules that apply to the import of shellfish from non-EU countries are somewhat disingenuous.”

He added: “The failure here is of the Government to properly explain to this industry the reality of trading with the EU as a third country. These are the conditions that logically apply as a consequence of choosing not to be a member. The UK has put itself on the other side of existing barriers.

“This is also a consequence of the Government choosing to pursue as thin as possible a Brexit deal (i.e. Lord Frost refusing to ask for anything more than Canada has). The Government has *chosen* for this to happen.

“Addendum: A key issue with seafood exports from the UK is it seems that we are catching seafood from insufficiently clean waters. So let’s get our seas cleaned up please!”

In 2008, Britain was a full member of the European Union, meaning it would have participated in drawing up and passing the law.

“Aquaculture animals and products thereof intended for human consumption should therefore only be imported into the Community from third countries, territories, zones or compartments which are included on a list drawn up in accordance with Article 11(1) of Regulation (EC) No 854/2004 of the European Parliament and of the Council of 29 April 2004 laying down specific rules for the organisation of official controls on products of animal origin intended for human consumption.”

“Not a ban on UK imports specifically.

“Just another of these third country rules that we were hoping we would be able to avoid but didn’t manage.”