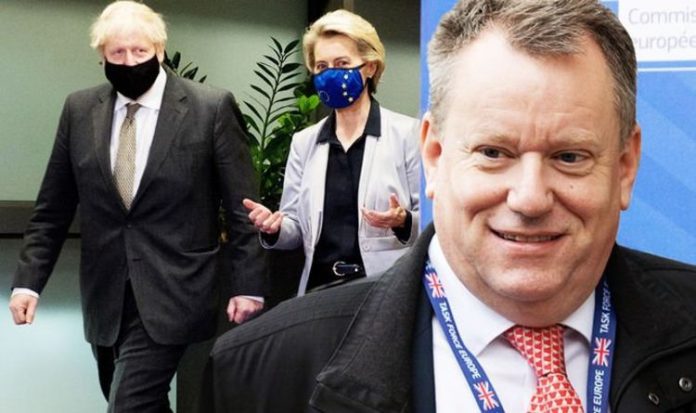 Brexit: David Frost says he is ‘working hard to get a deal’

For months the key sticking points to agreeing a Brexit deal have been the same: fishing rights and common standards. As the negotiations reach their final state, though, it looks like the latter, also known as the “level playing field”, might be the last stumbling block. Since the start of the talks, the EU insisted that in order to have access to its single market, Britain needs to sign up to regulatory alignment, creating a “level playing field” on which EU member states and other countries can trade.

On the other hand, Downing Street believes Brexit is about regaining the sovereignty to be able to set its own rules, outside of EU regulations.

European Commission President Ursula von der Leyen has recently hinted at a possible compromise – but an agreement appears far away.

Ms von der Leyen said Britain would not need to be aligned with the EU’s standards in the future but a mechanism would be needed to address potential competitive advantages gained by either side.

She said: “We have repeatedly made clear to our UK partners that the principles of fair competition is a precondition to privileged access to the EU market.

“But this is not to say that we would require the UK to follow us every time we decide to raise our level of ambition.”

The two sides have only got until December 31 to reach a deal.

As the clock ticks down and tensions rise, David Henig, the UK director of the European Centre for International Economy, has shed light on the main reason Brussels is asking Britain for harder “level playing field” provisions.

The trade expert claimed that the bloc’s demands on the level playing field are in fact new and that, indirectly, the UK’s chief negotiator David Frost, is to blame.

Mr Henig explained: “Let us go back five years to the height of Transatlantic Trade and Investment Partnership (TTIP) discussions.

“As you may recall, by 2015 TTIP was about as popular in the EU as allegedly the EU is these days in the red wall.”

In order to gain popularity, Mr Henig continued, the EU wanted to show there were tough labour and environment protections against undercutting by the “nefarious and probably untrustworthy” US.

However, there was a problem with EU level playing field provisions in 2015, as the Directorate General for Trade responsible did not want anything to be enforceable.

Protesters rallying against the TTIP in Hanover, Germany, 2016 (Image: GETTY)

“Now, such soft-touch EU enforcement of level playing fields was probably designed particularly for developing countries, where sanctions were seen as unfairly penalising struggling businesses and individuals for the actions of a terrible government. Not the US.

“To make it worse for the EU their level playing field conditions were so weak there was a real chance that they would breach US red lines.”

Fortunately, Mr Henig wrote, TTIP talks ended in 2016 before the “embarrassment of having weaker level playing field conditions than the US became widespread”, but the traditional EU approach was clearly not sustainable.

For this reason, from 2016 to 2019, there was a lot of discussion about stronger EU level playing field provisions.

He concluded: “So who was the next country in line for the EU’s new tough level playing field conditions? It just so happens that it will be the UK. Perfect testbed, like the US a bit untrusted on the deregulation front.

“But let us finish by going back in time to the start of the story, of the optimism of TTIP talks that would transform EU-US relations. The head of UK trade pushing hard for the agreement that would years later lead to UK-EU stalemate was of course David Frost.”

Lord Frost, who at the time was the CEO of the Scottish Whiskey Association (SWA), did strongly campaign for the TTIP.

The SWA was very pro-TTIP and was also a member of the Government’s core TTIP stakeholder group.

In particular, the SWA saw TTIP delivering precedents for future trade deals, including in the area of regulatory convergence and investor-state dispute settlement.

In a June 2014 speech delivered in Brussels, Lord Frost told then-Trade Commissioner Karel De Gucht: “There could be more creativity in trade negotiations.

“The EU/US TTIP is potentially an excellent example here, with the proposed Spirits Drinks Annex to set out best regulatory practice as an example to others. Moreover, the TTIP will enshrine the Commission’s excellent idea of a ‘living agreement’, i.e. providing a framework to negotiate issues that don’t make it into the initial deal.

“This too could be a model. With our biggest partners, we could aim at continuous negotiating processes providing periodic agreements, rather than big bang deals.

“This would mean that sectors not in an initial agreement could still look forward to the prospect of liberalisation, rather than, as now, losing it for a generation.”

In an exclusive interview with Express.co.uk, former Ukip MP Douglas Carswell said he had no doubts about Lord Frost’s capabilities and negotiating skills.

Mr Carswell said: “I met David Frost as a new MP when I happened to go to Denmark on a House of Commons Select Committee trip.

“He was the ambassador in Copenhagen.

“I met this extraordinary man – who was the first and one of the only British officials who was clearly eurosceptic.

“He understood intellectually why Britain should be outside Europe.”

Referring to a lecture the special adviser made at Brussels’ ULB university in February, the prominent Brexiteer added: “His speech was spot on.

“A brilliant understanding of history.

“The reason why I became a eurosceptic is because I read a book about history and it showed that the reason why Europe was the number one centre of civilisation and innovation was because it didn’t have centralised control.