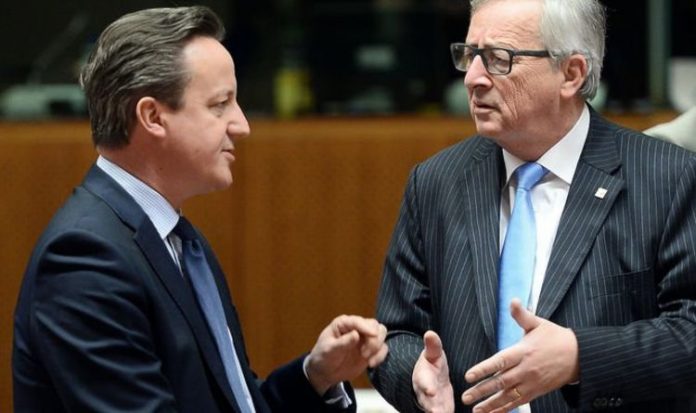 The EU had a chance to salvage a favourable deal with the UK but failed to do so, Express.co.uk was told. It comes as the Bank of England’s head, Andrew Bailey, warned the bloc against a raid on the City of London. He said the BoE will “resist very firmly” any moves by Brussels to force financial trading worth trillions of pounds to relocate following Brexit.

The City was a focus of both sides during negotiations last year, with London one of Europe’s – and the world’s – main trading hubs.

Speculation has grown in recent weeks that EU officials could demand more financial businesses move within the bloc’s borders in a post-Brexit world.

Addressing MPs on the Commons Treasury Committee earlier this week, Mr Bailey said Brussels appeared to be moving towards a position where euro-denominated derivatives clearing would be forced to take place within the eurozone.

He said that a move like this would be “highly controversial” and is something the UK would “have to and want to resist very firmly”.

Brexit: The EU was shortsighted in not making concessions to David Cameron, Express.co.uk was told (Image: GETTY)

Andrew Bailey: The BoE governor has warned Brussels against a raid on the City of London (Image: GETTY)

The belligerence could well have been avoided, claimed the renowned historian Robert Tombs, if the EU had got on board with concessions put forward by former Prime Minister David Cameron.

In 2016, shortly before the Brexit referendum, Mr Cameron travelled to Brussels to negotiate a new relationship that would give Britain “special status” in the bloc.

While he succeeded in agreeing on several things with the bloc – including out-of-work EU migrant benefits – much of his requests were flatly turned down.

He had to compromise on things like migrant tax credits, under heavy pressure from Poland and other central European countries, and also failed in his original demand to ban migrant workers from sending child benefit money back home.

JUST IN: FURY as effigy of Margaret Thatcher’s severed head on a pike erected

Professor Tombs suggested that the EU had been short-sighted in its reluctance to ease its grip on a renewed deal, and had thus effectively bolstered the “Leave” campaign.

He said: “When Cameron tried to negotiate a deal which would give us some sort of guarantees of our future, he didn’t get one.

“You might say if there had been some European politicians who were very forward looking they would have said, ‘We must keep the UK in’.

“But the fact is they didn’t seem all that bothered. So they’ve lost quite a lot.”

Robert Tombs: The historian said things might have been different if the EU had conceded ground (Image: Penguin)

In the waning days of 2020, Prime Minister Boris Johnson and his Government secured a Brexit deal with the EU after four years of negotiating.

Talks went down to the wire, with either side waiting for the other to blink.

A free trade was effectively struck between the two.

While things have so far gone mostly without fault, changes in tax for businesses and consumers has made for more difficult transactions.

Some specialist companies on the continent have ceased deliveries to the UK as a result of the alterations.

Yet, things have largely remained the same.

Professor Tombs said it is a point that largely disproves “Project Fear” – the campaign that predicted economic doomsday scenarios after the UK’s exit.

Brexit endgame: The events that led to the historic referendum in 2016 (Image: Express Newspapers)

Paul Embery, a leading trade unionist and Labour member, noted that Brexit could empower a future government to build on things that were previously hard to under Brussels rules.

He cited manufacturing, industry and state aid as avenues the UK might reinvigorate.

Talking to Express.co.uk, Mr Embery: “We’ve now freed ourselves from the shackles of the EU which I believe to be an explicitly anti-socialist institution, which is very much in favour of market forces and pro-austerity, and against public ownership and against state aid.

“These powers will now be repatriated to the UK.”

UK industry: Things like manufacturing and industry could be invigorated post-Brexit (Image: GETTY)

However, he added that he didn’t expect the changes to be made under a Conservative Government.

Meanwhile, the EU is currently “catching up” to the UK in its mass vaccination programme, according to European Commission President Ursula von der Leyen.

The bloc had got off to a bad start in what should be the start of the end of the coronavirus pandemic on the continent.

Many blamed “Brussels bureaucracy” for its lagging behind the UK – a point which momentarily saw Ms von der Leyen threaten to block Britain’s vaccine supplies.