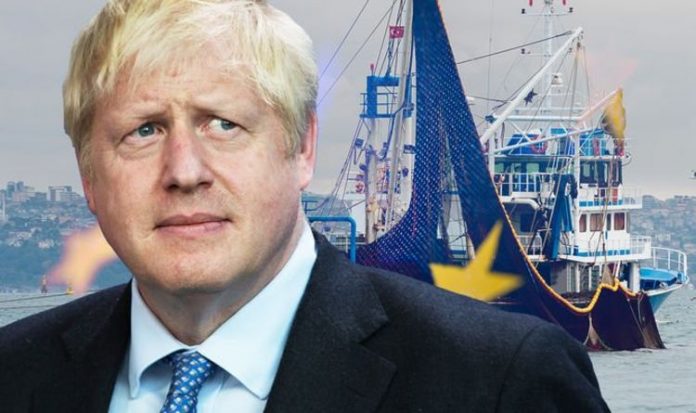 Brexit negotiations have repeatedly stalled over demands from European Union members to maintain access to British waters at the end of the transition period in December 2020. Prime Minister Boris Johnson has rejected suggestions EU vessels will be able to continue fishing around the UK as he pledges to “take back control” of the industry. And Centre of Brexit Studies Researcher David Hearne suggested Mr Johnson is unlikely to budge on his fishing pledge because of the symbolic importance fisheries have had on the pro-Leave argument.

“It is something the UK has argued again and again is a potential benefit to leaving the EU.

“For those on the Brexiteer side who have argued this it’s going to be very, very difficult to give it up.”

Despite the fishing community contributing little to the British economy, the issue has emerged as one of the most difficult points of contention for the UK and the EU to agree on.

The tension between the two sides on the issue of water access has sparked speculation clashes could be on the cards for British and EU fishermen if an agreement is not reached.

“Overall, you have a quite complicated un-retractable position there.”

The EU has been warned failing to reach a deal with the UK could have catastrophic for the sector across several member states because of their high-dependency on UK fishing waters.

Fisheries economist Ralf Döring said: “When you see the negotiations, you have to expect that there will be no deal as of January 1st. So no fishing contract.

“And that would mean that German fisheries or EU fishermen are no longer allowed to fish in British waters.”