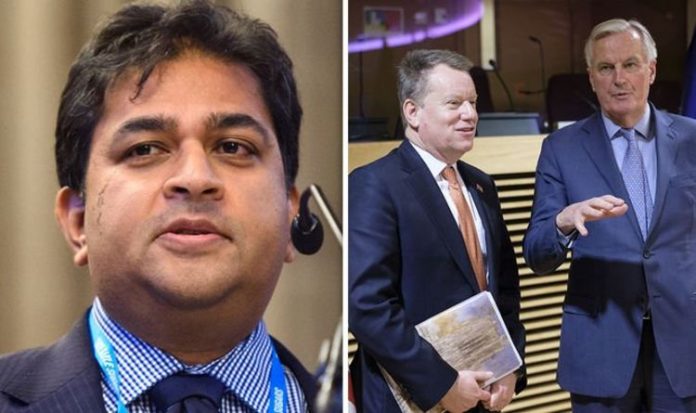 Back in Downing Street, Mr Johnson was upbeat as he declared Britain had secured its negotiating objectives.

He said: “We have taken back control of our laws and our destiny.

“It is a good deal for all of Europe”.

The agreement will come into force on January 1, guaranteeing tariff-free trade on most goods and creating a platform for future cooperation on issues such as crime-fighting, energy and data sharing.

It is without a doubt a huge triumph for the Prime Minister, who in December last year, won a thumping majority at the general election with the promise “to get Brexit done”.

One of the major victories the Government can claim is arguably on the level-playing-field.

One of the biggest sticking points in the talks was the EU’s insistence on an “evolution clause”, or “equivalence mechanism”, as Downing Street termed it.

This would have allowed the EU to unilaterally apply tariffs on UK goods in the event of standards diverging over time. If one side upgraded their rulebook, the other would have to follow, or face consequences.

In the end, compromise was reached. It bears a closer resemblance to the UK objective than that of Brussels. The Government had merely wanted a reflection point in the future where the two sides could discuss upgrading the basic minimum below which neither could go.

The deal provides for a review and “rebalancing” clause, which allows either side to initiate a formal review of the economic parts of the deal, including the minimum level of standards.

If either side drags their feet on agreeing a new floor for standards, the other may apply tariffs subject to the approval of an independent arbitration panel.

In an exclusive interview with Express.co.uk last week, Government trade adviser Shanker Singham revealed why the UK-EU Free Trade Agreement has the potential to be a major contribution to global trade policy problems, such as the China-US dispute.

The trade expert said: “There will be a dispute settlement mechanism in the FTA.

“Basically, if one party was violating those principles, then the grieved party could essentially sue the defendant under the FTA dispute settlement mechanism.

For example, Mr Singham claimed, if the UK violated those principles with measures that gave it an unfair advantage over Brussels in the area of the automated sector, the EU would be able to apply tariffs specifically to the UK’s measures.

Mr Singham argues this would be better than retaliatory tariffs because it is more sophisticated and would “advance the international trade agenda of the world”.

He explained: “This would be a major contribution to global trade policy problems.

“After all, this is the biggest issue in the China-US trade dispute.

“This is the solution that is possible.”

President Donald Trump in 2018 began setting tariffs and other trade barriers on China with the goal of forcing it to make changes to what the US says are “unfair trade practices” and intellectual property theft.

The Trump administration stated these practices may contribute to the US–China trade deficit, and that the Chinese government requires transfer of American technology to China.

In response to US trade measures, the Chinese government has accused the Trump administration of engaging in protectionism.

On January 15, 2020, the two sides reached a phase one agreement, but tensions persisted.