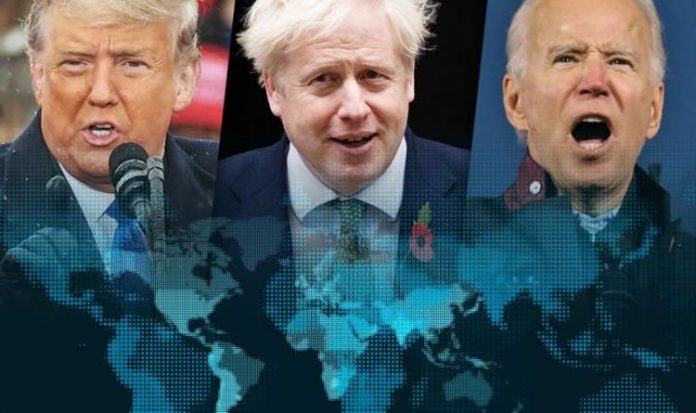 Brexit talks between the UK and EU have intensified in recent weeks as the November deadline to reach an agreement nears. Negotiators in Brussels have already conceded a major UK demand on fishing rights. This, among other things, appeared to be a point which neither side would ever agree on, so the EU’s caving in to the UK’s demands marks a pivotal turn of events.

Prime Minister Boris Johnson and his cabinet are now keen to secure trade deals elsewhere around the world.

One such deal has already been secured with Japan.

The most exciting and potentially lucrative, policy experts have suggested, comes in the form of the Comprehensive and Progressive Agreement for Trans-Pacific Partnership (CPTPP) – a free trade agreement between 11 countries.

Brexit: If the UK joins the CPTPP the US could follow suit creating a global trading bloc behemoth (Image: GETTY)

Boris Johnson: The PM is hoping to secure trade deals the world over (Image: GETTY)

President Donald Trump previously dropped out of the group in 2017 when it was called the Trans-Pacific Partnership (TPP), claiming the agreement was unfair on American workers.

Yet, should the UK consider signing up after January 31, Sean King, senior vice-president of Park Strategies in New York and an affiliated scholar at University of Notre Dame’s Liu Institute, told Express.co.uk that the US – under the leadership of either Joe Biden or Mr Trump – would be keen to follow suit.

This, Mr King explained, would result in the “highest grade trading bloc”, with the UK tipped to enjoy unprecedented levels of economic prosperity.

He said: “I still believe that the US will rejoin the CPTPP because it makes sense, especially given this new geopolitical reality that we find ourselves in.

JUST IN: Brexit trade deal: The UK is America’s single most important partner

“If Donald Trump were to win reelection given his good rapport with Boris Johnson, perhaps the UK joining CPTPP might be enough for Trump to reconsider his exit.

“If he can get some key plans renegotiated, his China trade deal doesn’t go through, and he too could say ‘listen I don’t love multilateral deals but we’re in a new world, we’ve got to be creative post-COVID, China’s the real problem here, my good friend Boris says it’s ok, I’m gonna do it.'”

Despite recent souring of relations, Mr King believes Mr Biden, should he win the election, would be entirely open to signing the US up, party politics aside.

Mr King said: “I think Biden would be open to bringing Washington closer to CPTPP – he won’t admit it now but I think he would.”

Donald Trump: The US President has said he would consider re-joining the CPTPP (Image: GETTY)

Joe Biden: The Democrat nominee also said he would consider singing the US up to the CPTPP (Image: GETTY)

This represents around 13 percent of global GDP – more than the Eurozone’s five largest economies combined, according to a Royal Bank of Canada report.

Before the US left the group, it comprised 40 percent of world GDP and 20 percent of global trade.

Many have noted that the UK’s membership would not only benefit the country economically, but also enable political leverage over China.

The CPTPP would provide the UK with preferential access to key markets in Asia and Latin America.

Mr Trump has hinted that he would bring the US back into the CPTPP under the right circumstances.

US election 2020: The election is up for grabs as Americans go to the polls today (Image: GETTY)

Similarly, Mr Biden has cautiously said he would consider rejoining.

His hand could be moved by the UK’s membership, as he has previously said he wants to stop China from setting the global economic agenda by forging business partnerships with Europe – an ambition made easier should the two be in the same trading bloc.