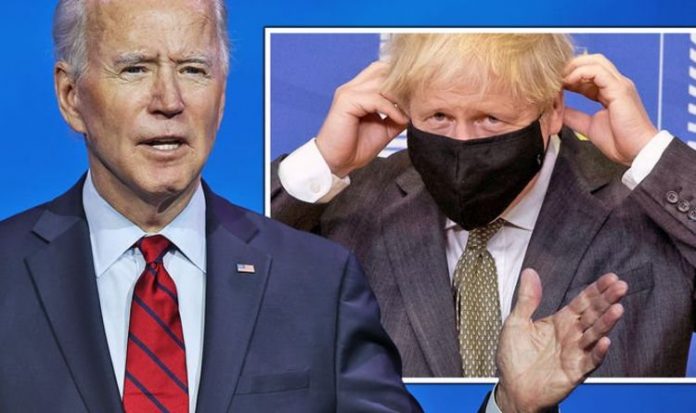 Joe Biden’s election victory in November will undoubtedly change the landscape of world politics as he replaces outgoing President Donald Trump. As Brexit trade talks reach a tense conclusion, it appears even UK-EU negotiations will also be shaped by the result across the Atlantic. The President-elect has long been vocal about his strong connection to Ireland, a country where his ancestors originated. The Democrat piled pressure on Prime Minister Boris Johnson during Brexit talks after he tried to modify his withdrawal agreement with the EU.

The UK Government wanted to change the Northern Ireland protocol, implemented to ensure an open border remains on the island of Ireland.

But Mr Johnson’s Internal Market Bill sparked anger in Washington, with Mr Biden warning that the Good Friday Agreement must not be a “casualty of Brexit”.

However, the Prime Minister also angered one of the US Congress’ most influential lobby groups – the Friends of Ireland – leaving the UK’s hopes of a US trade deal post-Brexit in disarray.

Congressman Richard Neal, chair of the powerful Ways and Means Committee and member of the Friends of Ireland caucus, released a statement in September condemning Mr Johnson’s efforts to change the protocol.

“I urge both sides to uphold the terms of this joint agreement, particularly with respect to the treatment of Northern Ireland, in accordance with international law.

“The UK’s departure from the EU at the end of this year and any US-UK trade agreement must preserve the Good Friday Agreement, which has maintained peace and prosperity for British and European peoples since 1998.

“Every political party on the island opposes a return of a hard border. I sincerely hope the British government upholds the rule of law and delivers on the commitments it made during Brexit negotiations, particularly in regard to the Irish border protocols.”

The group was reported to have as many as 54 members by The Guardian in 2019, outlining the key influence it could have over a US-UK free trade agreement.

READ MORE: Brexit: French fishermen warn ‘we have no future’

While this will be a step in the right direction as far as Washington is concerned, a former UK ambassador to the US warned there could still be ill-feeling between Mr Johnson and Mr Biden.

Sir Kim Darroch, made the claim in October, saying that Mr Johnson’s comments about Barack Obama in 2016 have had a lasting impact.

Mr Johnson accused Mr Obama of having an “ancestral dislike of the British Empire”, referring to his “part-Kenyan” ancestry.

The comments were branded “idiotic” and “deeply offensive”.

Sir Kim Darroch said: “I hesitate to say this, but there will be some Obama people in a Biden administration and they remember some of the things that the current Prime Minister said about Obama whether as a newspaper columnist or whether it was Mayor of London.

“I promise you there is still some resentment and unhappiness over that. I’m not sure there will be, you know, quite the warm, welcoming embrace from Mr Biden as it would from Mr Trump.”