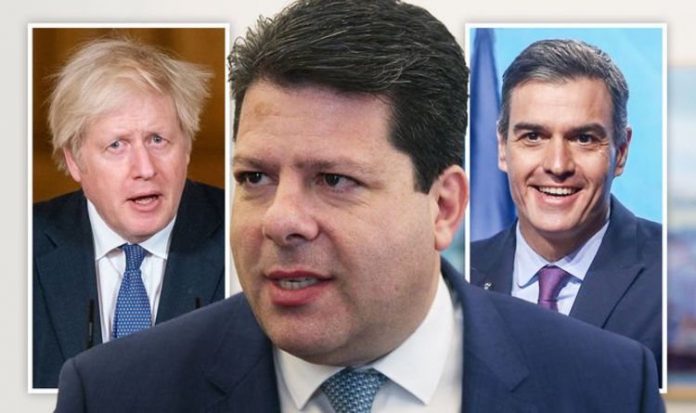 Prime Minister Boris Johnson managed to secure a last-minute deal with Spain over its British Overseas Territory of Gibraltar, just before the UK’s transition period came to an end in December. However, upon closer inspection, the deal appears to have a significant flaw. While not part of the agreement reached between Britain and the EU, this separate deal aimed to prevent a hard border.

The agreement means the territory has joined the EU’s Schengen zone and will now follow its trade rules — but it is officially no longer a part of the bloc.

Gibraltar was a uniquely challenging obstacle throughout the Brexit negotiations, as the area voted to Remain in the EU.

Spain has repeatedly claimed the region as its own territory as well, adding tensions to the already fraught discussions.

It was therefore a relief to many when the Spanish Foreign Minister Arancha Gonzalez Laya announced a preliminary agreement had been reached at the 11th hour, with a full treaty to be negotiated early this year.

She said: “After the withdrawal of the United Kingdom from the European Union, today is the beginning of a new relationship.”

Gibraltar’s chief minister Fabian Picardo said: “Spain is a member of the Schengen zone and she is extending the opportunity to enter into the Schengen area if you enter one of the entry points in Gibraltar.

“Gibraltar has two entry points: ports and marinas, and the airport.

“We’re going to avert the worst effects of a hard Brexit, but of course going to the wire means there may be many loose ends to settle with very little time to go.

“There are no aspects of the framework that have been agreed that in any way transgress Giblraltar’s positions on sovereignty, jurisdiction or control.”

“Supervision of these Frontex checks is to be exercised by Spain, however.

“After a four-year ‘implementation phase’, Spain’s Guardia Civil could take over the task.”

Gibraltarians are British citizens and the region is primarily known as a British military garrison and naval base.

It is self-governing, aside from matters related to defence and foreign policy, with its own elected representatives and parliament while the Queen appoints a governor for the territory.

Without this new agreement, Gibraltar’s economy would have struggled to stay afloat.

Much of its business is conducted on the other side of its borders, and the existence of a hard border would have weakened the territory significantly.

While 96 percent of its residents voted to remain in the EU, the territory is determined not to fall under Spanish sovereignty.

Therefore, the proposal that Spain’s Guardia Civil could end up monitoring the external ports in the future is one that Gibraltarians are unlikely to appreciate.