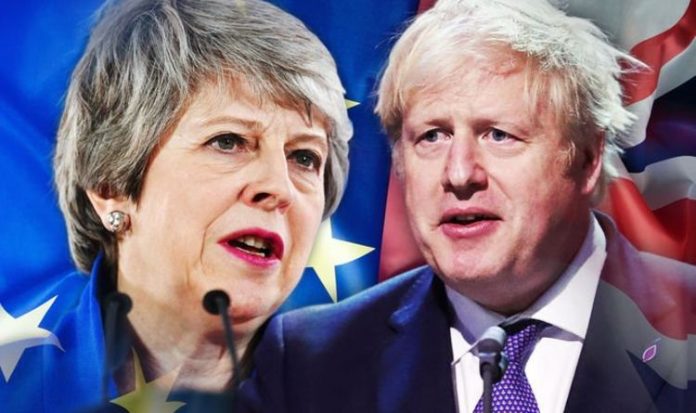 The UK and the EU clashed last month after Prime Minister Boris Johnson saw his controversial Internal Market Bill through Parliament. The Government’s aim is to make modifications to the Northern Ireland protocol which had been settled in the withdrawal agreement. The move sparked fury from Brussels after Northern Ireland Secretary Brandon Lewis admitted in Parliament that it could break international law in a “limited and specific way”. However, the Government has since claimed that aspects of the Northern Ireland protocol are open to interpretation. As the row intensified, Vice President of British Conservatives in Paris – Paul Thomson – claimed the Irish border became a trap which Theresa May fell into.

He told France 24: “I think Boris Johnson is trying to be transgressive, and that it is a deliberate tactic.

“I myself found this manoeuvre somewhat surprising, however I do not think the goal of the British Government is to undermine the relationship with the Irish Republic.

“And indeed, in the negotiations leading up to the withdrawal agreement there was a very good series of negotiating sessions between Boris Johnson and the Irish leader.

“I think that the framing of the Irish question being ultra-central to the entire Brexit process was a trap which was set for Great Britain.”

However, Irish MEP from The Republican Party, Billy Kelleher, hit back during the show claiming that the UK was being “cavalier” in its approach to the Irish border.

He said: “Anything that jeopardises the Good Friday Agreement we will feel very strongly about.

“It will cause chaos in the event of the British government going ahead, acting unilaterally and withdrawing from what was agreed and tearing up the withdrawal agreement.

“From that perspective the Irish government is very concerned, because we have spent many, many years building this peace process.

“Anything that would diminish that would be chaotic. If the British Government is being cavalier, if it is using the Northern Ireland peace process and the border as a bargaining chip with the EU, then they are on a very dangerous road.”

Mr Kelleher also addressed Mr Thomson’s comments, disputing the idea that the Irish border had been used as a trap.

He added: “I just want to take issue with something that was said earlier on. This was not a trap. The bottom line is there is a Good Friday Agreement, the UK gave no consideration to the issues on the island of Ireland.

“It was about making sure any settlement would withhold the conditions of the Good Friday agreement.”

The President of the European Commission, Ursula von der Leyen, confirmed that the EU will take legal action against the UK over the Internal Market Bill.

She said: “We had invited our British friends to remove the problematic parts of their draft internal market bill by the end of September.

“This draft bill is, by its very nature, a breach of the obligation of good faith laid down in the withdrawal agreement.

“Moreover, if adopted as is, it will be in full contradiction to the protocol on Ireland and Northern Ireland.

“The problematic provisions have not been removed. Therefore this morning the commission has decided to send a letter of formal notice to the UK government. This is the first step in an infringement procedure.”