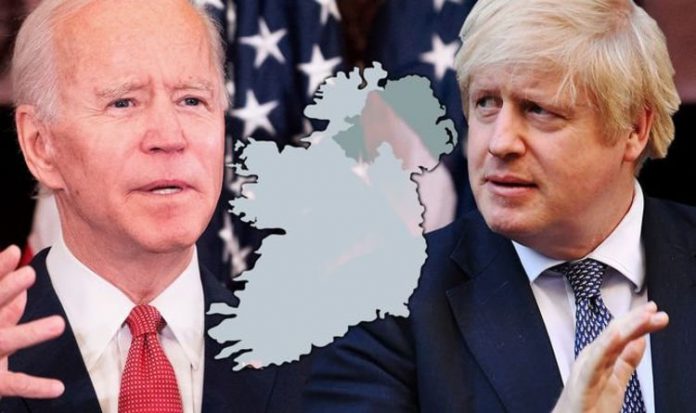 The Brexit negotiations were marred by legal rows earlier this year when the UK Government attempted to override the withdrawal agreement. The Government’s Internal Market Bill sought to make changes to the Northern Ireland protocol. Prime Minister Boris Johnson’s move sparked international outrage, with the EU launching legal action and condemnation also coming from the US. President-elect Joe Biden, who was then in the middle of an election campaign, stepped in to warn Mr Johnson that the Good Friday Agreement must not become a “casualty of Brexit”.

Mr Biden, like many in the US, has Irish heritage.

Around 10 percent of the US population identified as being Irish in the 2017 American Community Survey conducted by the US Census Bureau.

And this is reflected by the many American-Irish politicians in Washington who have threatened to block a UK-US trade deal over the border issue in Ireland.

Congressman Richard Neal, chair of the powerful Ways and Means Committee, which has jurisdiction over all taxation, tariffs, and other revenue-raising measures has previously warned that the Good Friday Agreement must be protected.

He is also a part of the Friends of Ireland group in Washington.

He said earlier this year: “The American dimension to the Good Friday Agreement is indispensable.

“We oversee all trade agreements as part of our tax jurisdiction.”

The Massachusetts-based politician believes there would be little support for any pact that undermines the Good Friday Agreement.

He added: “I would have little enthusiasm for entertaining a bilateral trade agreement with the UK, if they were to jeopardise the agreement.”

The Friends of Ireland caucus consists of dozens of politicians that sit in the Senate or the House of Representatives.

Last year, it reaffirmed its support for the Good Friday Agreement with a resolution urging that the accord be adhered to.

It called on the UK and EU to ensure Brexit does not threaten peace in Northern Ireland and opposes any hard border.

The US legislation was co-sponsored in the House of Representatives by Democratic Congressman Thomas Suozzi and Republican Congressman Peter King.

Mr Suozzi said: “The United States played an important role in the signing of the Good Friday Agreement, a momentous achievement that has been largely responsible for the relative peace over the last two decades.”

Congressman King added that it was “imperative that the United States do all that it can to not only support the Good Friday Agreement but prevent any return of a hard border”.

Professor Scott Lucas of Birmingham University told Express.co.uk in March that the Irish lobby would pose huge problems for Mr Johnson if he tried to get a post-Brexit trade deal with the US while undermining the Good Friday Agreement.

The US politics expert said: “Whatever administration that’s there if you negotiate an agreement, the US Congress will not allow that free trade agreement if there is a hard Irish border, they will not approve it.

“Right now, the Johnson government is in a mess, where they have a provision which prevents a hard border – but if they get rid of that customs line down the Irish Sea we are back to a hard border.

“The UK cannot advance on an agreement with the US until it is clear what is going to be agreed with the EU because of the Irish question.”

The Government may heed these warnings this week as it announces plans to ditch some of the controversial clauses in the Internal Market Bill while looking for a last-minute deal with the EU.

Cabinet Office minister Michael Gove said he was “delighted” to have reached an agreement, including on post-Brexit arrangements for the Irish border, following talks with European Commission vice-president Maros Sefcovic.

This move could save the UK’s hopes of a US trade deal.