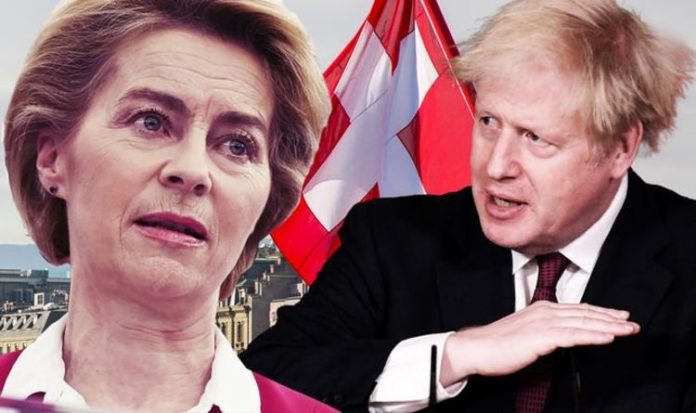 Prime Minister Boris Johnson has secured a trade deal with the EU, boasting that the agreement will grant the UK more sovereignty. As a result of the trading accord, the UK will have more control over its fishing waters, borders and laws. However, sectors like financial services are yet to learn their long term fate, and fresh rows between London and Brussels have been predicted as a result. The UK accepted measures in the agreement for the possible imposition of tariffs if London diverges notably from existing standards.

This has caused anger in the City, as one expert warned the Government made a “grave mistake”.

Mr Johnson admitted following negotiations that the UK’s trade deal with the EU “perhaps does not go as far as we would like” over access to EU markets for financial services.

Switzerland is also embroiled in a similar row with the EU over financial services’ access to the single market and also the issue of equivalence.

The EU has demanded that the UK conform to the equivalence model post-Brexit to ensure British financial services operate on similar rules to those in Europe.

But one analyst warns that Brussels could have overplayed its hand in both sets of negotiations, giving the UK and Switzerland hope that they can secure concessions from Brussels.

Michael McKee, partner at British multinational law firm DLA Piper, told CNBC that the EU may not be able to maintain its tough stance on equivalence.

READ  Leaked Tier 6 guidelines: What a Tier 6 lockdown could look like as Boris under pressure | UK | News (Reports)

He said in 2019: ″[Equivalence] has been used in an informal fashion as a tool to get outcomes but usually directed towards getting other countries to make changes to the law or adapt a little more to the EU approach, and usually with smaller countries, not mid-level, well developed countries like Switzerland — it is the first time that a country has really stood up to the EU other than large economies like the US or China.”

He added that the “concrete impact in Switzerland has not been significant in financial markets terms,” and claimed that the UK was in a stronger negotiating position than Bern.

Mr McKee continued: “The UK stock market and stocks on that market collectively are much more substantial, so if the EU was to take on the UK like this, the volumes of the London Stock Exchange and the FTSE 100 are a bit more balanced against the stocks being traded on the various EU countries’ markets.”

Autonomiesuisse, a committee of entrepreneurs in Switzerland, wrote in a statement that the Brexit deal shows that the country can take on the EU in the next round of negotiations.

They said: “Overall, the sovereignty policy issues in the Brexit negotiations were largely settled in the way Autonomiesuisse is seeking for the Switzerland-EU framework agreement.

“The Brexit agreement shows that there is potential for negotiation with Brussels.”