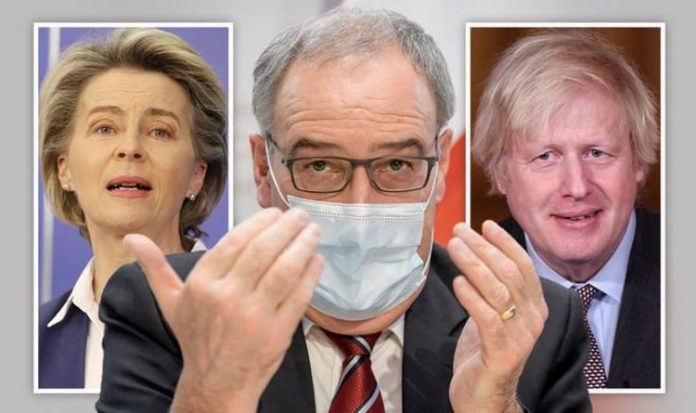 The UK and Switzerland will look to strengthen ties via a financial services pact as both countries endure tension with the EU. Brussels and London clashed during the recent debacle over coronavirus vaccines, when the EU threatened to stop the delivery of jabs into Northern Ireland. The move came after months of tense negotiations for a Brexit trade deal, in which rows over fishing, trade and regulation threatened to see the UK leave the EU without a deal. Switzerland has also been negotiating with the EU over an institutional framework agreement.

Negotiations for the partnership began in 2014, but are still to reach a formal conclusion.

This process has been marred by fallout over stock markets after the EU chose not to recognise Switzerland’s equivalence in 2019.

This meant investment firms in the EU were no longer allowed to trade on the Swiss stock exchange.

Swiss Prime Minister Guy Parmelin, who at the time was economy minister, warned the EU in 2019 that Switzerland could do a deal with the UK instead, blaming Brussels’ “dogmatic” approach.

He said: “We want a good solution that can win majority support, and that is not the case at the moment.

“I don’t think we can wrap up this year. Our agenda and that of the EU allow a conclusion only next year at the earliest.

“I think the EU would weaken itself if it no longer cooperated with Switzerland on research.

“We are then forced to seek alternatives, perhaps along with Britain, if the EU remains dogmatic.”

The Swiss have followed through on this plan, as the Government announced last month that formal talks with Bern had commenced in a bid to broker a new post-Brexit financial services agreement.

Catherine McGuinness, Chair of the Policy & Resources Committee at the City of London Corporation said she is confident that negotiations with Switzerland will prove more fruitful than the current “paralysis” between Britain and the EU.

Switzerland and the EU have also seen their ties strained over the regular referenda the country holds on key policy areas regarding Europe.

Swiss news site SwissInfo reported in September that Switzerland’s decision to limit immigration in a 2014 referendum left “bad blood” between Bern and Brussels.

This was eased in September however, as Swiss voters rejected a proposal to end an accord with the EU allowing the free movement of people.

With all referendum votes counted, nearly 62 percent said they wanted to keep free movement, while 38 percent were against.