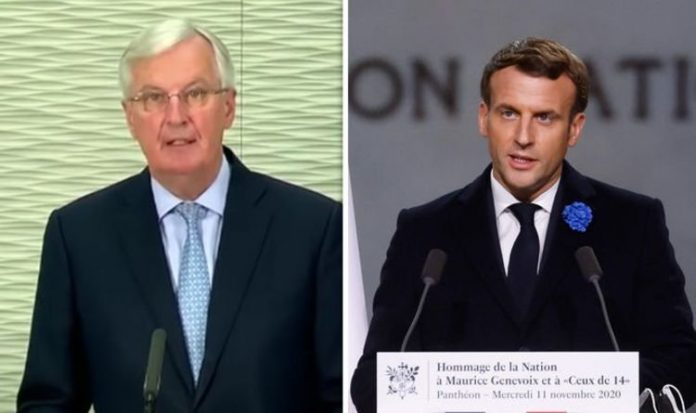 The French President said earlier this week that he will “not accept an agreement that does not respect our long-term interests” amid fears Mr Macron could veto a trade deal between the UK and EU at the last-minute. Member states have been pressuring Mr Barnier – the EU’s chief negotiator in Brexit talks – to show them the contents of the deal before finalising an agreement with the UK. Mr Barnier is still in London, attempting to resolve disagreements over fisheries, state aid and a so-called level playing field on trading standards. The talks have been in a state of stalemate for months as the deadline for the end of the transition period draws closer.

Mr Macron has reportedly sent a “serious warning” to Mr Barnier, urging him to stand by his red lines and deny the UK any concessions.

Mr Macron, alongside leaders from seven other coastal nations in the EU, have called on Mr Barnier to ensure access to UK waters is preserved.

The French President said earlier this week: “We will be particularly vigilant about the conditions of fair competition, today and for the long term, and the question of fish.”

Analysis by journalist Wolfgang Munchau on SpectatorTV last week highlighted how France could veto a deal.

He said: “The danger now is not the trade negotiators, they are doing a good job.

“The difficulty they have is to ensure when they come up with this trade agreement, Mr Johnson and Mr Macron will do the right thing and not start to extend this and make another unreasonable demand.

“They are nervous because they may have to ratify an 1800-page piece of text in a week.

Despite this, Mr Barnier said yesterday that the UK has made some concessions on fish.

The UK signalled that it could accept 60 percent of the value of stocks from British seas from January 1, down from the 80 percent London had originally called for.

Mr Barnier made the revelation in a meeting with EU ambassadors, after being forced into a rare defence of his negotiating strategy by EU member states.