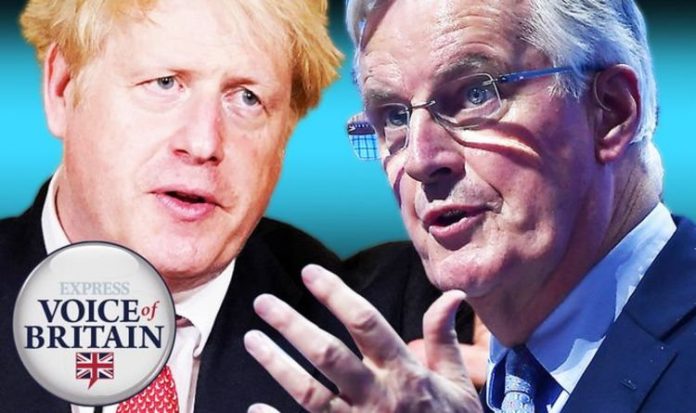 Boris Johnson has pledged to retake control of the UK’s fishing waters post-Brexit but as of yet, the two sides have failed to come to a compromise. In order to agree a Brexit deal, it has emerged the Prime Minister could offer concessions on access and allow fishing quotas to be established at a later date. Due to this, Express.co.uk asked readers today, “Would you accept a fishing compromise to secure an EU trade deal?”

Responding to the poll, readers voted overwhelmingly in favour of protecting the UK’s fisheries.

In contrast, 2,025 said Mr Johnson should drop his demands over fisheries in pursuit of a free trade agreement, just 221 said they were not sure on the issue.

Commenting on the poll, one person said: “No compromise on our waters and our fish.

A second said: “Do not betray the voters now. Brexit means no compromises.

“If you do compromise your support will drop away like autumn leaves.”

A third said: “As an EU member state we conceded control of our waters to Europe.

“Then why would they give away the sovereignty of our waters?

“We voted out and we meant all the way out.”

Under the potential fisheries proposal, EU ships will be allowed access into UK waters next year and will establish quotas later on.

The two sides are understood to have entered the ‘tunnel phase’ of talks whereby negotiations take place away from media scrutiny.

Michel Barnier and Lord David Frost are currently negotiating in Brussels but could return to London to conclude negotiations if there is significant movement from the EU.

Talks resumed 10 days ago and both sides have agreed to intensify negotiations in order to sign a free trade deal in time – with the transition period ending at the end of the year.

Amid the reports over fisheries, a UK Government spokesman said: “We’re not commenting on ongoing negotiations, but our position on fisheries has been clear from the start.