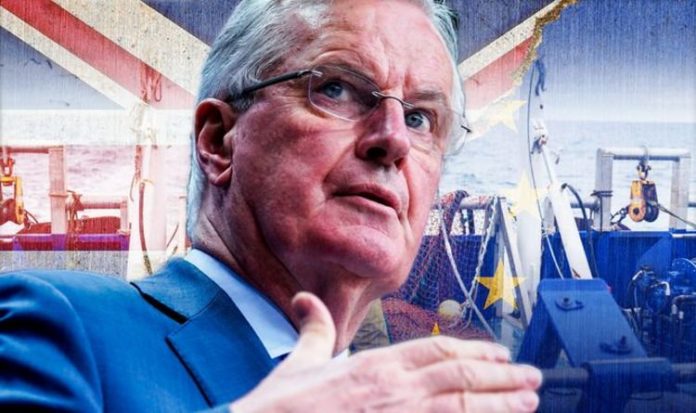 Negotiations have reached breaking point as Prime Minister Boris Johnson’s October 15 deadline for a deal arrives. It is likely talks will be extended, but time is nonetheless running out for Brussels and London to reach a compromise on state aid, the level playing field and fisheries. Fishing remains a stumbling block as differences remain between the EU and UK, as well as feuding member states. The ‘Group of Eight’ coastal countries, which rely on UK fishing grounds, are urging Mr Barnier not to back down. The UK wants sole control of its waters, but Brussels has warned that without access for European countries, Britain will be excluded from Europe’s markets.

Patrick Murphy, chief executive of the Irish South and West Fish Producers Organisation, told RTE that he feared the consequences without a deal.

He said: “There are 400 vessels from the EU known to fish between the North Sea, the Irish Sea, the French Channel, off the Shetlands, that fish inside UK waters.

“If they are denied access, where are they going to go? We have 164 [Irish] vessels over 18 metres length.

“In 2006 we had 280. We’ve already taken the pain as a nation to sustain the stocks off our coastline for everybody else to fish.

“We’re down nearly 50 percent of our fleet in 10 years. So, it would be crazy now to see an influx of boats back into that area.

Denmark is also putting up a fight, as the country’s fishing communities face significant challenges if the UK and EU cannot strike a deal.