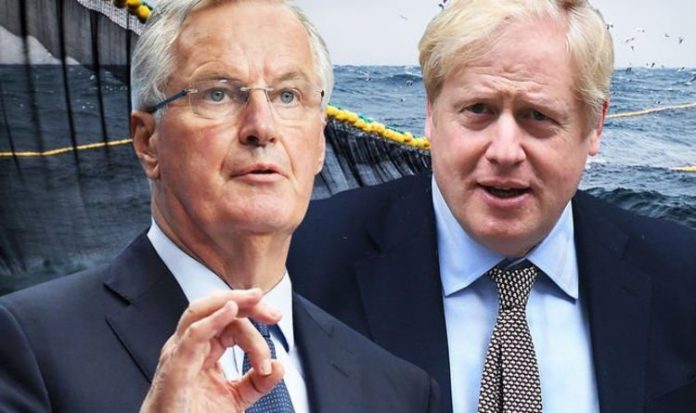 Negotiations have reached breaking point as Prime Minister Boris Johnson and EU negotiator Michel Barnier fail to make progress. Mr Barnier has agreed this week to put everything on the table and “intensify” talks as he looks to secure a deal with the UK. Brussels and London have clashed over red lines on state aid, regulation and fisheries as the end of the transition period approaches. The EU has demanded continued access to UK fishing grounds despite warnings from Mr Johnson that Britain will take control of its waters. Brexit threatens to take a huge toll on fishermen in Europe, as shown by the EU’s contingency planning. In January last year, Brussels revealed its plans to help fishermen impacted by the UK’s withdrawal from the bloc.

One would allow compensation for European fishermen who work in British waters now if they find themselves cut off after Brexit.

In a statement, the Commission said: “This will help off-set some of the impact of a sudden closure of UK waters to EU fishing vessels in a no deal scenario.”

The other proposal would pave the way to grant Britain access to EU fishing waters until the end of 2019, in return for Britain allowing EU fishermen into its waters.

The ‘Group of Eight’ coastal countries, which rely on UK fishing grounds, are urging Mr Barnier not to back down and ensure they are granted continued access to UK waters.

Mr Barnier has been speaking this month by video link to ministers from the Group of Eight, including Ireland, Belgium, Spain, the Netherlands, Denmark, Germany, France and Sweden.

One diplomat said: “He gave me the impression that his line has become harder.

Denmark is also putting up a fight, as the country’s fishing communities face significant challenges if the UK and EU cannot strike a deal.