In negotiations, the European side has so far insisted that its vessels continue to enjoy unfettered access to UK waters, even after a post-Brexit transition phase that ends on December 31.

However, Britain wants this access limited significantly and has called for fishing rights in its waters to be renegotiated every year ‒ a demand that, according to sources close to the talks, the EU will refuse.

As the clock ticks down and tensions are set to rise, in an exclusive interview with Express.co.uk, Labour historian and author Greg Rosen claimed Britain is faced with an even bigger challenge regarding fishing.

READ  Rule of 6 exemptions: Does the rule of 6 include babies? (Reports)

Mr Rosen argued the Cod Wars with Iceland could return once the UK leaves the EU’s Common Fisheries Policy (CFP), as disputes will once more arise over who can fish in international waters.

He said: “A very substantial challenge UK fishing fleets have faced over the last 50 years or longer has been regarding their access to disputed waters claimed by Iceland.

“The successive Cod Wars – there have been three – are testament to that.

“Because Iceland was able to use its leverage in NATO during the Cold War, Britain found itself in a very difficult position and had to give in.”

Mr Rosen noted: “The most popular fish, as I understand it, remains cod.

“And so one of the biggest challenges remains how this will be negotiated under the UN Convention.”

International tensions over fishing date back to the 19th century when steam trawlers started venturing further away from Britain in search of fish.

Unfortunately, the fishing boom caused by improvements in technology started affecting fish stocks, making it harder and harder to get fish.

For this reason, British boats sought new waters nearer Iceland, which in turn started resenting the UK for depleting its own stocks.

In 1952, Iceland declared a four-mile zone around their country to stop excessive foreign fishing. The UK hit back by banning the import of Icelandic fish.

JUST IN: Johnson to deliver ‘Brexit in name only and cave in to EU demands’

However, in 1958, after years of failed diplomacy, Iceland expanded the zone to 12 miles and banned any foreign fleets from fishing in these waters, in defiance of international law.

The UK rejected this, and instead of sticking to the limits, sent Royal Navy frigates to accompany fishing boats into the exclusion zone to continue fishing.

A game of cat-and-mouse ensued between the Icelandic coast guard vessels and the British trawlers.

In response to attempts to seize them, the trawlers rammed the coastguard vessels and the Icelandics threatened to open fire, although major incidents were thankfully avoided.

In 1961, the two countries came to an agreement that allowed Iceland to keep its 12-mile zone in return for conditional access for UK boats.

These led to even more clashes between Icelandic trawlers and Royal Navy fisheries protection vessels.

In January 1976, NATO had to get involved regarding a skirmish between HMS Andromeda and an Icelandic gunboat called Thor.

The organisation helped the parties reach another agreement in May 1976 over UK access and catch limits.

This gave 30 vessels access to Iceland’s waters for six months.

Due to Iceland’s strategic usefulness to the US, NATO started to put pressure on the UK to concede for the sake of the military alliance in the midst of the Cold War.

However, the loss of Atlantic fishing grounds cost around 1,500 jobs in the ports of Scotland and north east England, with many more jobs lost in in-shore support industries.

The UK also decided to establish its own 200-mile limit and eventually the UN decided to draw up the Convention on the Law of the Sea, giving every sovereign nation an “exclusive economic zone” (EEZ).

The EEZ stretched up to 200 miles from the coastline or up the median point between one country and its neighbour.

A year later, the European Economic Community (EEC) – the precursor to the EU – adopted the Common Fisheries Policy, opening up access to every EEC country.

However, as Mr Rosen mentioned, when the UK leaves the CFP, disputes could once more arise over who can fish in what waters.

The UN convention has never properly been operated on in Europe – as it was so closely followed by the CFP. 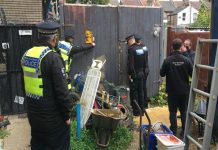