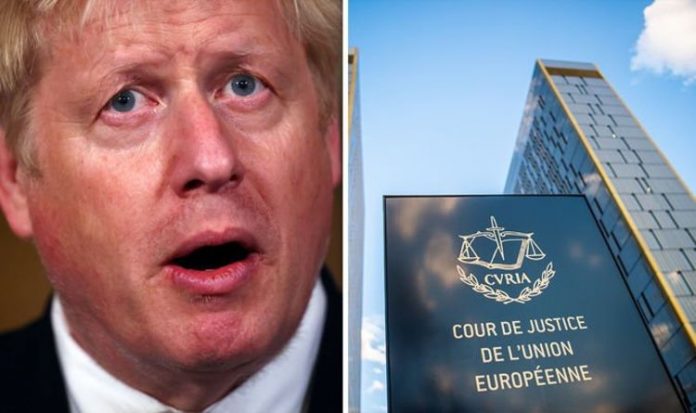 Britain and the EU have reached a post-Brexit trade deal after months of intense negotiations. On Thursday afternoon, a statement from Downing Street announced “the deal is done” – swiftly followed by a confirmation from Brussels. Speaking shortly after the announcement, Prime Minister Boris Johnson said the agreement was a “good deal” for the “whole of Europe” – one that signified “a new stability and a new certainty in what has sometimes been a fractious and difficult relationship”.

He added: “We’ve taken back control of our laws and our destiny. From January 1, we are outside the customs union and outside the single market. British laws will be made solely by the British Parliament, interpreted by the UK judges sitting in UK courts and the jurisdiction of the European Court of Justice will come to an end.”

Mr Johnson also said the UK had achieved a “Canada-style” trade deal worth £660 billion and addressed the agreement on fisheries, a major issue during the negotiations, saying that the UK had taken back “full control” of its waters.

The most crucial victory, though, appears to be taking back control from the European Court of Justice (ECJ).

The UK was adamant it would no longer be under the jurisdiction of the ECJ but the EU wanted to keep this in place to ensure it could ask for sanctions against Britain if it felt London was undercutting European consumers and businesses.

The UK appears to have got its way, with the deal planning for “binding enforcement and dispute settlement mechanisms”.

As usual, though, the devil is in the detail and in the full text of the trade agreement published on Saturday morning, it does seem the UK also compromised on this matter.

EU judges’ orders will still be enforceable in the UK, in relation to the bloc’s programmes, such as Horizon.

The Brexit deal says: “Decisions adopted by the European Commission imposing a pecuniary obligation on legal or natural persons other than States in relation to any claims stemming from Union programmes, activities, actions or projects shall be enforceable in the United Kingdom.

“The order for its enforcement shall be appended to the decision, without any other formality than a verification of the authenticity of the decision by the national authority designated for this purpose by the United Kingdom.

“The United Kingdom shall make known its designated national authority to the Commission and the Court of Justice of the European Union. In accordance with Article UNPRO.5.1 [Communication and exchange of information], the European Commission shall be entitled to notify such enforceable decisions directly to persons residing and legal entities established in the United Kingdom.

“The enforcement of those decisions shall take place in accordance with United Kingdom law.

“Judgments and orders of the Court of Justice of the European Union delivered in application of an arbitration clause contained in a contract or agreement in relation to Union programmes, activities or parts thereof under Protocol I shall be enforceable in the United Kingdom in the same manner as European Commission decisions, as referred to in paragraph 1 of this Article.”

BBC Economics editor Faisal Islam still considers it a victory but noted that it might set a precedent for future involvement in wider EU schemes.

He wrote on Twitter: “Government argues that the tribunals are not connected to the ECJ, showing the win on sovereignty… Only one reference in the entire text to ECJ on governance is in relation to UK access to EU programmes, where ECJ arbitration judgements and orders will be enforceable in the UK.

“That seems a very limited pathway for ongoing ECJ influence, connected to clearly EU schemes – but might it set a precedent for future involvement in wider EU schemes and agencies.”

Express.co.uk understands from one well-placed Westminster insider that the ECJ aspect was a key factor for many hardline Brexiteers.

Former Labour MP Gisela Stuart, who quit the party over her euroscepticism and who now sits in the House of Lords, tweeted: “Congratulations to the Brexit negotiation teams on both sides.

“Sets the scene for a respectful and good future relationship.

“Key point for me is that our courts and Parliament will have the final say and not the ECJ.”

Brexit Party chairman and former MEP Richard Tice said: “Brexit compromise: elements neither side will like.

“Subj to detail we appear free politically, free of ECJ, foreign policy & defence but more linked than I wanted on the level playing field, state aid and fishing.

“We will have to find ways to deal with this in future. But it’s done.”