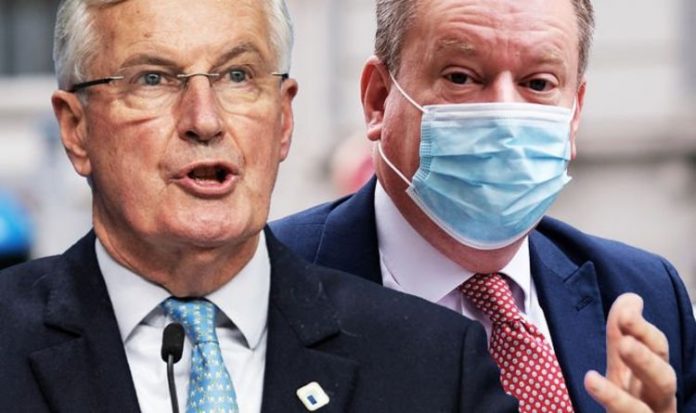 Trade talks between Britain and the EU are being held in Brussels this week, with time running out to agree a deal before the UK leaves the single market and customs union on December 31. Despite optimism at the start of November, both sides agree there has been little progress on the fundamental blockages that have dogged an agreement since the start of the year. As he arrived in the Belgian capital on Monday, the UK’s chief negotiator David Frost signalled that he will not be deviating from Prime Minister Boris Johnson’s “red lines” amid speculation that the departure of Dominic Cummings from Number 10 could herald concessions.

Downing Street has made clear more than once that Britain is not afraid of leaving the bloc without an agreement in place.

However, in a largely forgotten column written just after Britain voted to leave in 2016, Lord Frost revealed his vision for the future negotiations with Brussels and much to the horror of hardcore Brexiteers, he did not rule out rejoining the EU after the transition period.

He wrote: “First, we need to be realistic about how to negotiate Brexit.

“It will be our most complex negotiation ever. We can’t afford to get it wrong. Whole industries could be destroyed if we do so.”

Adopting a Norway status immediately as a transitional arrangement, Mr Frost wrote, would have been the best option.

Leaving the door open to rejoining the bloc, he also claimed that after the scheduled exit, Britain should retain this status for five years and use the period to either reflect or, if necessary, negotiate an FTA like Canada’s.

He explained: “Remainers and Leavers should also be able to unite around this as a transitional arrangement.

“Remainers because it is the least disruptive in the short run and would preserve important economic and business interests like the financial services passport.

“Leavers because it would achieve Brexit quickly, extract us from everything bar the single market and some closely associated policies, return to us our own farming and fisheries policies, and gives us at least the protection of the EEA safeguard clause for free movement. And if we want to go further, we always have that option.”

Mr Frost, who at the time was the CEO of the Scottish Whiskey association, noted in his piece for The Telegraph: “Of course both sides would have to compromise.

“But they are going to have to anyway.

“As a former trade negotiator, I don’t believe we can agree, ratify, and implement a Canada or Swiss-style FTA in two years. It is just too complex.

“Nor can we put in place and effectively enforce quickly an Australian-style points system for immigration.

“We need time and this gives us it.”

Regarding Lord Frost’s comments, a Government spokesperson told Express.co.uk: “We have already left the EU, with a deal, on January 31.

“Both the EU and the UK have committed to reach an agreement on our future relationship by the end of this year.

“No one should be casting doubt on it.”

It is not the first controversial comment made by Lord Frost before becoming chief negotiator, though.

In a pamphlet written just before the referendum, he warned that in trade talks with the EU “it will be Britain that has to make the concessions to get the deal”.

Lord Frost said that while the EU and countries around the world would want trade deals with the UK, they would ultimately have the upper hand.

He referred to Britain as the “demandeur” – a reference to the fact that the UK would be the applicant seeking new trade deals.

The demandeur is usually regarded in trade circles as having less leverage.

The chief negotiator wrote: “After leaving, the UK will have to renegotiate trading arrangements simultaneously with many major countries, including the EU, in a two-year window.

“There may not be goodwill.

“It will be Britain that has to make concessions to get the deal.

“True, other countries will want deals too, but they won’t be under anything like the same time pressure and can afford to make us sweat.”

Lord Frost was writing in a report produced by political consultancy and PR agency Portland Communications, entitled “Britain Votes Leave: What Happens Next”.

At the time, he was chief executive of the Scotch Whisky Association but was writing in “a personal capacity”.