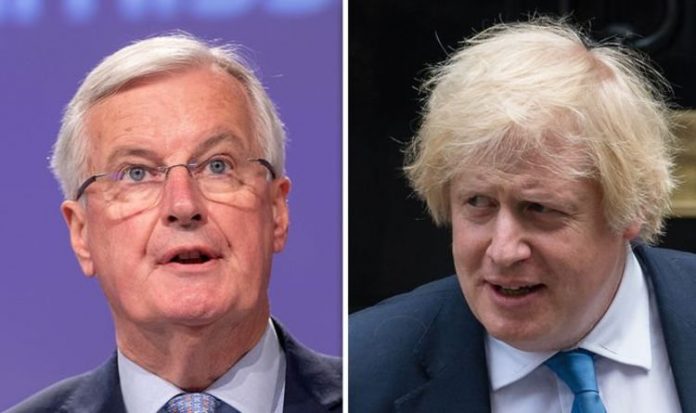 Even during the two years of withdrawal talks, the UK and the EU’s relationship was shattered by tense talks and frustrating lack of progress. Similar concerns have plagued trade talks as the UK accuses Brussels of causing a “paralysis”. Brexit negotiations have stalled in recent months over two key issues – fisheries and regulatory alignment. Prime Minister Boris Johnson wants to fulfil a Leave campaign promise that the UK will take back control of its waters post-Brexit.

Some Brexiteers have argued that accepting EU demands would be going back on promises made to Leave voters in 2016.

A similar row erupted when Greenland left the EEC in 1985.

The territory’s representative in the EU – Lars Vesterbirk – revealed his tense exchanges with Europe during Greenland’s departure.

Mr Vesterbirk said: “I think [the EU] will have the same attitude now as they had 30 years ago.

“That when you leave the family, you should not expect to get anything easily.

“You ask for membership – you don’t then leave. That’s the attitude of most of the EU members.

“Another fundamental ideology is simply that the advantages of membership are for members, not for those standing on the outside.

“We spent a lot of time convincing the EU that of course you can leave – the EU is not a prison.”

Mr Vesterbirk lifted the lid on a frustrating meeting with the Italian minister for Europe at the time.

He continued: “He simply wasn’t willing to give us anything; [he was] not accepting the referendum’s legitimacy.

“When [Greenland’s prime minister] Jonathan Motzfeldt finally lost his patience, he said: ‘OK, Mr Fiori, I don’t have any more time for you because I have to go and see the Pope.’

“Three days later we got Italy’s approval. We had never thought that a visit to the Pope would have such an influence – we didn’t know that he had anything to do with fishing rights.”

Reflecting on what he called a “victory” over Brussels – Mr Vesterbirk said he was able to achieve this because he was “prepared”.

He said at the time that this could give the UK a key advantage in Brexit talks.

He added: “We won because we were much, much better prepared than our counterparts.

“It’s very simple – the Eurocrats have many other things to take care of. They cannot spend all their time over the next five, six years just on Brexit.

“We still have an EU that should be operating on behalf of the remaining 27 countries.”