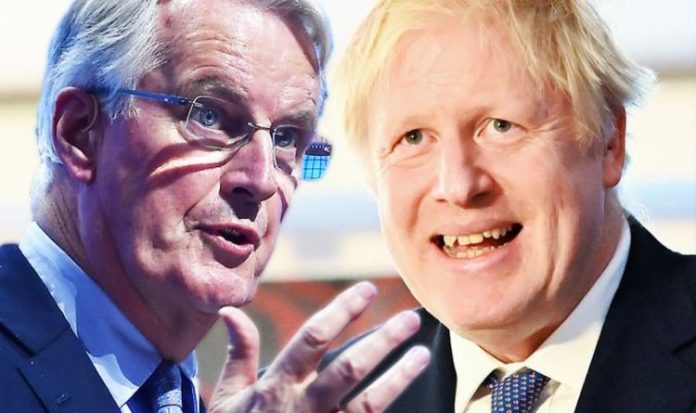 Prime Minister Boris Johnson is looking to override the withdrawal agreement in a move that could lead to a no deal Brexit. The Internal Market Bill, published on Wednesday, addresses the Northern Ireland Protocol – an element of the withdrawal agreement designed to prevent a hard border returning to the island of Ireland. The bill seeks to give powers to UK ministers so they can modify or “disapply” rules relating to the movement of goods – Northern Ireland Secretary Brandon Lewis admitted this week that this could break international law.

It comes after months of stalled talks, as the EU and the UK fail to compromise on other issues such as fisheries, trade and regulatory alignment.

The Prime Minister has told the bloc that an agreement must be reached by October 15 or the UK will walk away from negotiations.

The move has sent shockwaves across Europe, shown by European media’s reaction this week.

She said: “It is unreasonable to think that the UK government is ‘doing everything possible’ not to get a deal.”

She added that some in Mr Johnson’s entourage think the “no deal” would be a “good result” for the country (as the Prime Minister said on Monday).

Closing an agreement would allow these criticisms to be partly silenced. Above all, a “no deal” would give unstoppable arguments to the SNP, which is already at the top of the polls”, she added.

Prime Minister Johnson also faces anger from within his own party.

Mr Johnson warned that, without his efforts to override the withdrawal agreement, Brussels could “carve up our country”.

Conservative MP Tobias Ellwood, the chairman of the House of Commons Defence Select Committee, told Sky News the government’s strategy was causing “a lot of collateral damage” and risked diminishing the UK’s status as a “global role model”.

They said: “We both opposed Brexit. We both accept it is now happening. But this way of negotiating, with reason cast aside in pursuit of ideology and cavalier bombast posing as serious diplomacy, is irresponsible, wrong in principle and dangerous in practice.”

He added that “the withdrawal agreement was signed at pace, and there were ambiguities”.