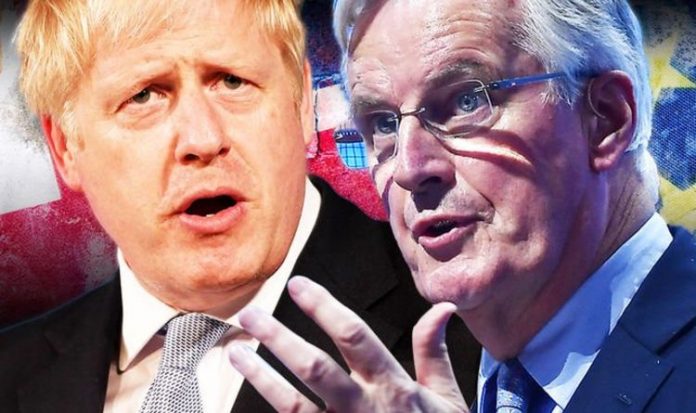 Prime Minister Boris Johnson and European Commission President Ursula von der Leyen had an emergency meeting yesterday as talks remain in a state of deadlock. EU negotiator Michel Barnier left London on Saturday keeping his cards close to his chest, but both sides warned of “significant divergences” which leaves Brussels and London no closer to a deal. Mr Barnier said last week: “We keep calm, as always, and if there is still a way, we will see.”

The UK Government has said a “deal is there to be done” today, but France24’s correspondent Dave Keating gave a worrying forecast.

He said that “it’s looking very bad”, suggesting a no deal-Brexit could be beckoning.

Mr Keating said: “Ahead of this call between Boris Johnson and Ursula von der Leyen, we knew it was very unlikely that they could find some kind of big picture diplomatic fix, or that deal would be done tonight.

“One thing we didn’t know is whether the EU would throw in the towel, they didn’t.

“It’s looking very, very bad, this does look like a last roll of dice rather than just trying to iron out last minute changes.

“It is looking like they are just going to be too far apart to bridge the gap at this stage.”

Major sticking points remain – including fisheries and a ‘level playing field’ on regulation and trading standards.

The EU has told the UK it must keep its fishing grounds open to European vessels and accept a level playing field on regulation to keep access to European markets.

However, Brexiteers in the UK argue this would break many of the promises made to voters during the 2016 campaign.

The deadline for the transition period is the end of this year, but Mr Keating warned a deal needs to be agreed way before then so that it can be ratified.

“That is a complicated discussion and it would have to happen this Thursday, otherwise there just wouldn’t be enough time to get a deal ratified.

“At this point, all that is possible is a very simple FTA, not what the UK was envisioning, and even that would be hard to get approval for.

“It’s four days, then that’s it. Then they have to kick in emergency preparations for no deal.”

He said: “One of the reasons [for the impasse] is the bureaucracy of the EU.

“They’ve got to get 27 heads of states to agree to a negotiating position, whereas David Frost can speak to Boris and Boris can make a decision.