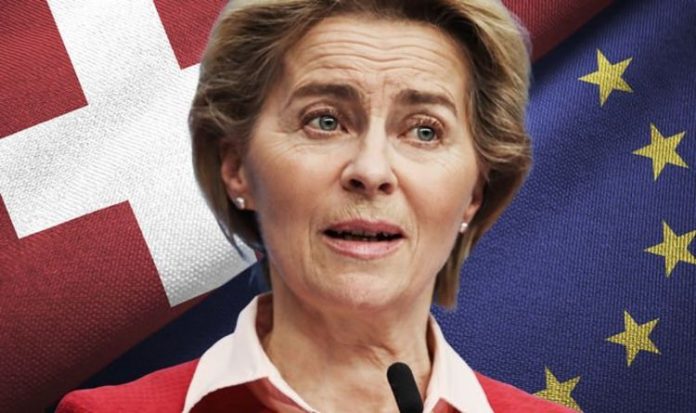 Prime Minister Boris Johnson was eventually able to secure a Brexit trade deal with the EU, and boasted that it will help Britain take control of its borders, laws and waters. But one key issue could come back to bite the UK, just as it did Switzerland during their negotiations with the EU over an institutional framework agreement. Negotiations for the partnership began in 2014, but still Bern and Brussels continue to work together on only a patchwork of treaties. Tensions were high in January 2018, when Switzerland’s financial services sector was “taken hostage” by the EU.

All political parties in the country united to stand against Brussels after EU regulation dictated that Switzerland must accept rulings by EU judges as the condition for services access to the single market.

The equivalence model served as a warning for the UK amid Brexit talks, as one Brussels diplomat told The Times.

They said: “Equivalence would mean that City access to the single market will be hostage to every political dispute between the EU and Britain after Brexit.”

Despite Mr Johnson securing a trade deal, the future of the UK’s financial services remains unclear.

He admitted following negotiations that the UK’s trade deal with the EU “perhaps does not go as far as we would like” over access to EU markets for financial services.

The UK accepted measures in the agreement for the possible imposition of tariffs if London diverges notably from existing standards.

This has caused anger in the City this week, as one expert warns the Government made a “grave mistake” in not dealing with the issue of equivalence earlier.

Niki Beattie, chief executive officer of Market Structure Partners, told Financial News: “The UK is now in a very difficult position where Europe has the upper hand in any negotiation as the liquidity has already shifted.”

However, Simon Gleeson, a partner at law firm Clifford Chance, said equivalence is not expected.

Bank of England Governor, Andrew Bailey, has fumed at the EU’s demands this week.

He told a Westminster committee yesterday that Brussels’ demands to the Treasury on potential future regulatory decisions were “problematic”.

He said: “The first motivation would be the EU thinks the rules should never change – that’s obviously mad and I don’t believe that’s what they think because they actually review and change their own rules.

“Secondly, they think our rules should only change when their rules change and we’ve discussed this many times – this would be rule taking, which we obviously don’t support.

“The third one, the sensible one, is that both of us will change our rules when it’s sensible to do so, we’re both transparent about it, but obviously we’ll be transparent at the time and transparent to everybody.

“It’s nothing unique and that seems to me the sensible basis and that’s the basis to judge equivalence.”