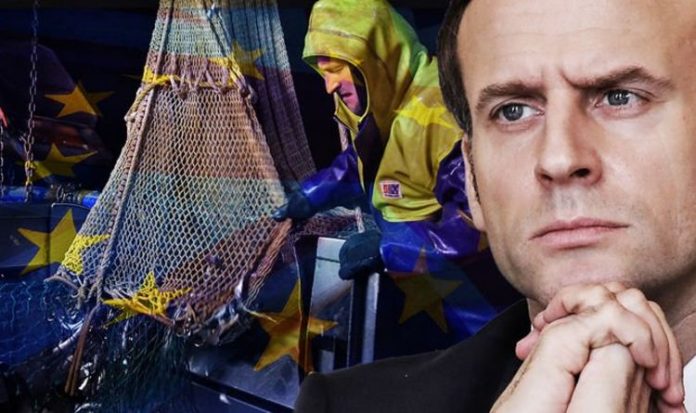 Before the negotiations on a future trade deal between the UK and Brussels even started, the French government made it clear to the EU’s chief negotiator Michel Barnier that he had to push for stronger commitments on regulatory alignments and access to UK fishing waters in return for maintaining free trade. Ever since the 2016 EU referendum, French President Emmanuel Macron has been championing the bloc’s fishery demands. In 2018, he suggested that if the UK was unwilling to compromise in negotiations on fishing, then talks on a wider trade deal would have been slow.

In February, the Frenchman claimed he was willing to put up a fight over the issue. He appears to have kept his word.

As he arrived at a summit of EU leaders in Brussels today, he said: “In no case shall our fishermen be sacrificed for Brexit.

“If these conditions are not met, it’s possible we won’t have a deal. If the right terms can’t be found at the end of these discussions, we’re ready for a no deal for our future relations.”

The political commentator argued the French President might be fighting for his political life.

He wrote: “As in the UK, the fishing industry’s economic contribution is small in France.

Organisation for Economic Co-operation and Development

“Total sales were around €2bn (£1.8bn) in 2016, and Organisation for Economic Co-operation and Development (OECD) statistics show that less than 14,000 people were employed in the fishing sector in 2018. Employment in fishing has fallen by eight percent since 2011. But fishing, like agriculture, is symbolically important in France. And northern French fishermen take the majority of their catch from British waters.

JUST IN: EU accused of using Irish Protocol as test UK must pass to reach FTA

“Macron might be worried about Xavier Bertrand, a high-profile former member of Les Républicains and potential 2022 candidate who is close with the industry.”

He continued: “Bertrand is president of the Hauts-de-France region. He served as health minister under Jacques Chirac and labour minister under Nicolas Sarkozy.

“Last month, he attended the general assembly of the Coopérative Maritime Etaploise, where he called for arm-wrestling with the UK in fisheries negotiations.

“More good optics for him. Bertrand has recently been spotted in meetings with a string of senior right-wing political figures, including LR [The Republicans] President Christian Jacob. Rachida Dati supports his candidacy, and Le Journal du Dimanche reports that he will meet with Nicolas Sarkozy next month. With the help of LR deputy Julien Dive, he has also been meeting with parliamentarians this week, and is set to meet with senators next week. His think tank La Manufacture has been mobilised to develop an election campaign strategy, and a recent Ifop poll put Bertrand at the top of the list of potential right-wing candidates.”

Mr Munchao also noted that many of Mr Macron’s recent policies and speeches have been aimed at attracting and retaining voters from the right.

However, he concluded: “But as we’ve argued, no deal will be much worse for French fishermen than what the UK is offering now.

“Macron has been slipping in the polls as the pandemic drags on, and last night’s curfew announcement probably won’t help. He has very little leverage and the UK knows it.

“His best option now is to climb down.”

Trust in Mr Macron is continuing to plummet amid the pandemic.

According to an internet poll published last week, around 62 percent of French people admitted to not trusting their President.

The Elabe poll for BFMTV, which asked 1,000 people in France aged 18 and over, also found that nearly one in two people (47 percent) think the President is not taking “enough precautions” to limit the spread of the virus.

With the 2022 French presidential election nearing, these latest figures are without a doubt a worry for the En Marche leader.