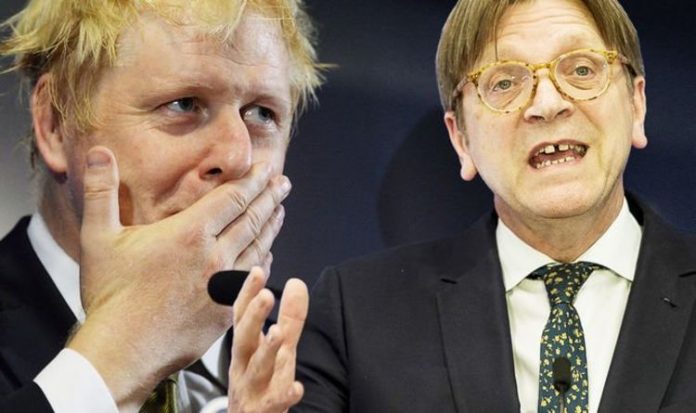 The UK and the EU will continue talks on post-Brexit trade talks this weekend, with time running out to achieve a deal. A senior Government source said the prospects of a breakthrough were “receding” and accused the bloc of making new demands over business rules. A Brussels source denied this, with the EU’s chief Brexit negotiator Michel Barnier calling Friday an “important day”.

The key sticking points in the talks remain in the areas of “level playing field” conditions for business, fishing rights and how any trade deal might be implemented.

Prime Minister Boris Johnson insists he will not agree to extend the transition period beyond December 31.

On the other hand, several EU diplomats suggested member states might want trade talks to continue for longer.

The EU’s comments should not come as a surprise as, according to a book, the bloc wants to keep Britain in Europe for as long as possible.

Documentary maker Lode Desmet and BBC broadcaster Edward Stourton shadowed Guy Verhofstadt, the European Parliament’s representative on Brexit, for almost two years, to make a documentary and book on the process leading up to the UK’s first scheduled departure from the bloc on March 29, 2019.

The unique access provided an insight into the thoughts and worries of the EU negotiating team and revealed how Brussels really operated.

In their book “Blind Man’s Brexit”, published in September 2019, the authors recalled how Mr Verhofstadt and German MEP Elmar Brok wanted the transition period to last for at least three years.

“For two years together… yeah!

“And then the transition period also.

Mr Brok noted “at least three years”, to which his boss added: “At least!”

During the negotiations, the group met with Mr Barnier on a regular basis, and it coordinated the European Parliament’s positions throughout the process.

For example, in December last year, he said the withdrawal agreement struck between the UK and EU could have been vetoed by Parliament if the issue of citizens’ rights was not fully resolved before Brexit day.

In 2017, the former Belgian Prime Minister and arch European federalist also said that future British governments would have a way back into Europe if they decided to reverse course after Brexit, possibly even on a fast-track.

In an interview with Al Jazeera English, Mr Verhofstadt said: “That is always possible.

“They can always reintroduce a request for membership of the European Union.

“Certainly, we have enough experience to make it a little bit a faster process than what is normal.”

His remarks arguably reflected a stubborn strand of thought in EU institutions and some EU capitals that Britain will bitterly regret its decision to quit the bloc and will soon be seeking a way to rejoin the club.

He said: “Although there are people who fondly dream about Britain rejoining, that is never going to happen.

“Anyone realistic understands that.

“Without the status quo advantage, there is no chance of Britain rejoining.”

Mr Hannan noted: “The question is not if Britain will rejoin the EU.

“The question is who is going to be the next to leave.

“Who is going to be the first to join us and the other 170 odd countries outside the EU, trading with our neighbours but governing ourselves.”