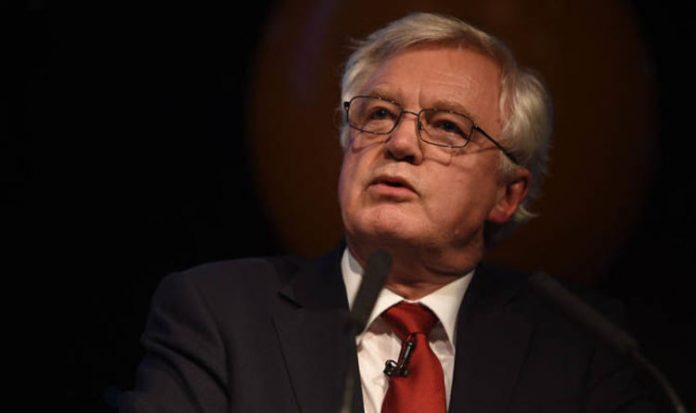 The report, by the think tank Insitute of Economic Affairs, will be launched later today by David Davis and Jacob Rees-Mogg.

The proposal advises ministers to break the deadlock in negotiations with Brussels by seeking a “basic” free trade agreement for goods.

The report says: “The UK running its own economy will not render a deal with the EU impossible.

“It will bring back real growth, let the UK do other trade deals, and create leverage to get positive results from EU negotiations.

“Political, trade, and regulatory independence is therefore not just an ideological position, but what makes the gains possible.

The new analysis is urging Mrs May to begin talks on new free trade deals with the US, China and India.

The think tank believes that it should be possible to negotiate a different deal that allows the UK greater economic autonomy.

As a solution to the deadlock in talks regarding the hard border in Ireland, the reports calls for cooperation mechanisms” to enable trade “formalities” to be completed away from the border.

The free trade agreement should eliminate tariffs and quotas on agricultural products the UK does not produce itself, while it “restores sovereignty” over UK fisheries.

Boris Johnson has backed the IEA’s plan in his Daily Telegraph column.

Mr Johnson wrote: “If we go with the Chequers approach, the public will spot it. They will see that the UK has become a vassal state, that we have not taken back control, but lost control.

“They will take their revenge at the polls. There is a far better solution, a SuperCanada free trade deal broadly on the lines set out by Shankar Singham in an IEA paper.

“That is the agenda the PM needs again to seize – because it has been her agenda in the past.”