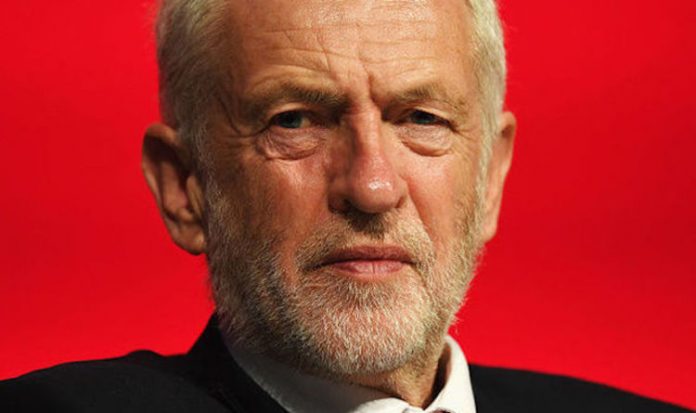 On Sunday, the Labour leader said he would be willing to perform a U-turn on his Brexit stance if the majority of the party wanted to support a People’s Vote on the outcome of Britain’s exit from the European Union (EU).

He said he would change his stance if activists within the party used a Brexit debate at the Labour conference in Liverpool to demand a second referendum.

The debate, due to take place on Tuesday, could provide a platform for remain supporters and critics of Theresa May’s criticised Chequers White Paper – including Tory Brexiteer Jacob Rees-Mogg – to join forces.

And while some Labour figures are plotting to “water down” the debate, Mr Corbyn said he would accept the final result of the discussion at the AAC Liverpool and respect the party’s wishes.

Corbyn will support the outcome of what the majority of the party votes for (Image: GETTY)

Mr Corbyn said: “Let’s see what comes out of conference and then obviously I’m bound by the democracy of our party.”

However, senior figures including Unite secretary Len McCluskey, have warned a second vote could risk the party losing seats, especially in the northern heartlands who predominantly voted to leave the bloc.

Speaking to the BBC, Mr McCluskey said: “We’ve had a People’s Vote, they voted to leave.

“For us to now enter some kind of campaign that opens up that issue again, I think would be wrong.”

Both Jeremy Corbyn and Tom Watson said they would support a new referendum if agreed by members (Image: GETTY)

Twenty Labour MPs represent seats where Leave polled 68 per cent of the vote or more in 2016.

But Brandon Lewis, Tory party chairman, said: “If Labour back a second referendum they will have broken their manifesto pledge and betrayed millions of people who voted in good faith to leave the EU.”

Shadow business secretary and MP for Salford and Eccles, Rebecca Long-Bailey, echoed Mr McCluskey’s fears of a can of worms being opened and disrupting the Brexit process further.

She said: ‘We are one of those constituencies that voted Leave by a slight margin but we had lots of mixtures of opinion, it wasn’t a binary choice for a lot of people.

“I think depending on how the referendum was set out, it could cause significant issues.”

Meanwhile Labour deputy leader and Corbynite Tom Watson said it was “only right” the party respects the wishes of the 86 percent of members that back a second vote.

He said: “It seems to me inconceivable that if the Labour party democratically decides, Labour party conference decides it wants a manifesto pledge on a People’s Vote that we would defy that decision.”

Mr Corbyn has always said he would back the terms of a Brexit deal and adhere to the democratic result of the EU referendum in 2016.”

Mr McCluskey has warned that a second referdum will lose Labour its northern supporters (Image: GETTY)

The Labour leader previously stated the party would consider all options available to the UK if a deal is not agreed between the Government and EU negotiators.

But following a compromise vote agreed on Monday night, the conference will now decide whether the party must support a public vote on Brexit in the event of a no-deal scenario – and if the Conservatives refuse to call an early general election.

A snap general election could take place as early as November if Mrs May fails to reach a compromise with the EU over certain issues such as the Irish border and freedom of movement.

In an interview on the Andrew Marr show on Sunday, Mr Corbyn condemned the Prime Minister’s approach to Brexit – but agreed on her opposition to the EU’s demands of a new border running down the Irish sea.

Mr Corbyn said: “I think it would be very hard to see how you should have checks on the Irish Sea, because that in effect brings back the question of the Irish border.”

The People’s Vote have been campaigning for a referendum on the final Brexit deal, with Remain backing MPs including Chaka Umunna and Lord Adonis, plus Tory Anna Soubry among its members.

In August, a leaked memo revealed the group were encouraging MPs and activists to submit a motion at the Labour conference to call on leader Jeremy Corbyn to back a second vote.

A poll commissioned by the People’s Vote in August said Labour voters were likely to back a second referendum.