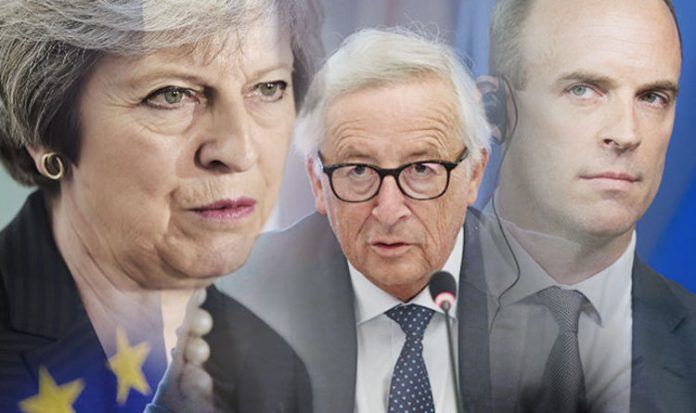 European Commission officials said they were aware of the events for the EU27 diplomats which are being described by the UK government as “technical seminars”.

The EU is concerned that any bilateral talks could derail the bloc’s Brexit negotiating strategy and allow Brussels to be sidelined at a time when both sides have admitted that a no-deal Brexit is a real possibility.

The UK’s Brexit Secretary Dominic Raab has said that if there were to be a breakdown of talks, there would be various mini-deals to mitigate the seriousness of a no-deal Brexit.

A diplomat from the European Commission told Politico: “We’ve explained everything that you should know, if you have more questions we’re always ready to provide answers. There’re absolutely no need to go to these seminars.”

It comes as German Chancellor Angela Merkel has warned business leaders Brexit talks between the UK and EU could collapse, ahead of a crucial meeting in Salzburg later this month.

She said: that she did not want the negotiations to collapse, but “we also can’t fully rule that out because we still have no agreement”.

Later today Mr Raab is due to face the Brexit Select Committee in Westminster to update MPs on the current negotiations.

Manchester Mayor Andy Burnham wants to extend talks between the UK and the European Union to stop the country leaving the bloc without an agreement.

Mr Burnham is also due to warn today the Brexit debate could just become about the prospect of a no-deal outcome and demands for a second EU referendum.

He is expected to say: “The biggest danger facing British politics right now is to allow this polarised no-deal/People’s Vote dynamic to shape the next six months.

7:30am: Mervyn King launches Brexit attack on May

Mervyn King has said that it “beggars belief” that the UK had been left in a situation where it was forced to take action or face catastrophe.

Speaking to the BBC, he said: “Frankly, if a government cannot take action to prevent some of these catastrophic outcomes, whatever position you take on the EU, it illustrates a whole lack of preparation.