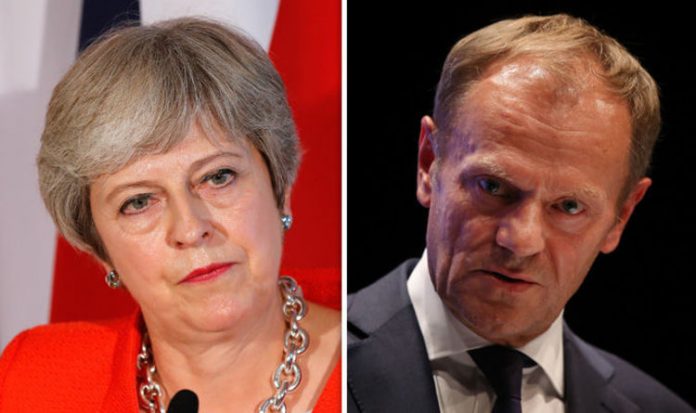 In what proved to be an extraordinary day at a summit in Salzburg, European powerhouses ambushed the Prime Minister by outright condemning her proposals, particularly her vision for the Irish border.

After European Council President Donald Tusk said the other EU27 leaders “all agreed” that Chequers plans would not work, Mrs May still insisted that a deal is possible, but also admitted there was “a lot of hard work to be done”.

This has led the Prime Minister to declare that Britain was edging closer to walking away from the EU without a withdrawal deal.

She now faces weeks of further chaos as a group of 40 pro-Brexit MPs set to join forces in voting against her Chequers plan, a move that could further derail progress as the clock ticks down to the Brexit date of March 29, 2019.

7.40am update: Chequers was never going to be the final deal, says Irish Deputy Prime Minister

He said on Newsnight: “There’s going to be no vote on Chequers anywhere between now and then.

“Chequers is the British Government’s settled approach towards what they want to see in the future relationship. The EU may have different views.”

Mr Coveney said Chequers will now be a “basis for negotiation” and that the text of the withdrawal treaty still needs to be finalised.

Theresa May is facing a revolt from 40-pro Brexit MPs who are prepared to vote againsty her Chequers plans for Brexit.

The warning came from former Brexit Secretary David Davis in an interview with the Huffington Post where he also made clear that Tory Brexiteers don’t fear a “no-deal”with the EU.

He said: “Every group in any political party has differences, egos and so on.

“But with Labour voting against the critical size of the voting bloc is quite small, it’s basically a dozen people.

“The rock-solid core of the European Research Group (ERG) [of Tory Brexiteer MPs] is a multiple of that. It’s probably 30, 40.”

7am update: May fuming following furious row with Donald Tusk

Theresa May has been left fuming following a blazing row with Donald Tusk that saw EU leaders turn on her Chequers plans during a chaotic day for the Prime Minister.

The European Council President insisted that the other 27 leaders “all agreed” that her Chequers plans would not work.

He said in a press conference: “Everybody shared the view that while there are positive elements in the Chequers proposal, the suggested framework will not work, not least as it risks undermining the single market.”

Mrs May then faced the press, but insisted that a Brexit deal is still possible and despite offering a fresh concession on Northern Ireland, she admitted there was “a lot of hard work to be done”.

In a warning to the EU, she said: ‘Let nobody be in any doubt – we are preparing for ‘no deal’.

If we get to a position where it is not possible to do a deal then the British people can have confidence that we will have done what is necessary to ensure we make a success of leaving the European Union regardless of the terms on which we do so.’

The Prime Minister also acknowledged she had a “frank” meeting with Donald Tusk shortly before her own press conference.