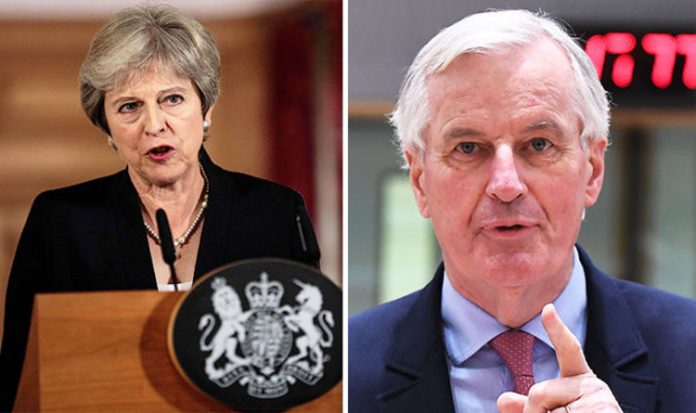 Mrs May addressed the media after EU leaders roundly rejected her Brexit plans at a tense European Council summit yesterday.

She admitted negotiations with Brussels had reached an “impasse” over the Irish border, the main sticking point in exit talks.

But she insisted Chequers was the best way to “protect jobs” and “avoid a hard border between Ireland and Northern Ireland”.

Here are three things we learned from the Prime Minister’s speech.

1. A no-deal Brexit could happen

Theresa May again indicated she could walk away from the negotiating table, amid growing tensions between the EU and UK.

The Prime Minister said she wanted a “good deal” with the EU but said any agreement must avoid the imposition of a hard Irish border.

Mrs May said: “We need serious engagement on resolving the two big problems in the negotiations and we stand ready.

“Anything which fails to respect the referendum or which effectively divides our country in two would be a bad deal.

“I have always said no deal is better than a bad deal. We cannot accept anything that threatens the integrity of our union.”

READ  Say Hy to the home of the future

In the fieriest section of her speech, the Prime Minister demanded the EU treats Britain with “respect” in the negotiations.

An angry Mrs May warned: “Throughout this process, I have treated the EU with nothing but respect. The UK expects the same.”

She also said it was “unacceptable” that the EU rejected her Chequers plan “without a detailed explanation and counter-proposals”.

She added: “We now need to hear from the EU what the real issues are and what their alternative is so that we can discuss them.”

READ  Coronavirus vaccine: Pfizer and BioNtech apply for approval - could be rolled out in days (Reports)

3. EU citizens in UK will be protected

The Prime Minister said the rights of EU migrants living in the UK would be protected if Britain leaves the bloc without a deal.

Mrs May said: “I want to be clear with you that even in the event of no deal your rights will be protected.

“You are our friends, our neighbours, our colleagues. We want you to stay.”

More than three million citizens from other EU countries currently live in the UK, according to official Government data.