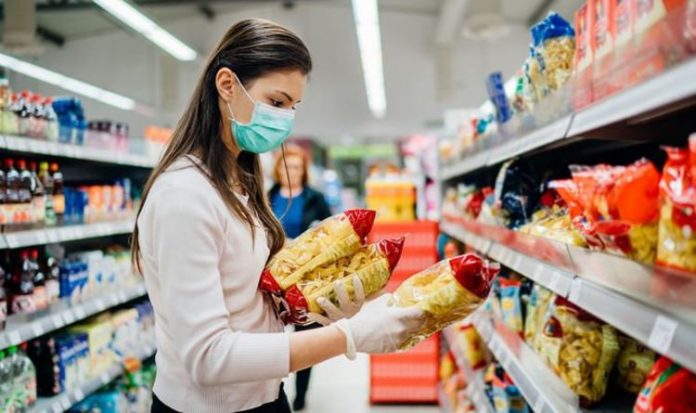 Shoppers are urged not to panic buy (Image: Getty)

But it admitted that imported fresh produce, including fruit and vegetables, may be affected. Meanwhile, Boris Johnson seized personal control of Britain’s no-deal preparations. The Prime Minister’s intervention is aimed at protecting vital supplies of food and medicines from January 1, the first day Britain will be fully free.

He will head an exit operations “super-committee” to run alongside the existing no-deal preparation group run by Michael Gove.

With the Brexit transition period due to end on December 31, there are fears of major disruption and delays at ports if no trade deal can be struck with the EU.

Even if there is an agreement, some difficulties may arise.

But Helen Dickinson, the chief executive of the BRC trade body, insisted food supplies in shops and supermarkets would not be greatly affected.

She said: “Retailers are doing everything they can to prepare for all eventualities, increasing the stock of tins, toilet rolls and other longer-life products so there will be sufficient supply of essential products.

No need to stock up – everything will be available (Image: Getty)

“While no amount of preparation by retailers can entirely prevent disruption, there is no need for the public to buy more food than usual, as the main impact will be on imported fresh produce, such as fresh fruit and vegetables, which cannot be stored for long periods by either retailers or consumers.”

Speaking on Times Radio about medicines, he said: “The NHS is very used to dealing with stockpiling of medicines and vaccines, and, if you take for example the coronavirus vaccine, we’ve got 350 million doses secured.”

But preparations for a no-deal will be ramped up significantly this week, with Cabinet ministers drawing up a £10billion bail-out package to bolster industries hardest hit by changes.

The four sectors likely to be affected most have been identified as agriculture and food producers, chemical suppliers, the automotive industry and fishing.

The proposals, compiled by Whitehall departments, include resilience deals for these four, who face trade disruption or being hit with punishing EU tariffs after January 1.

Under plans from the Department for Environment, Food and Rural Affairs, funding will be released to underwrite the losses of up to 3,500 sheep farmers who earn less than £10,000 a year, should they experience “severe market disruption” next year.

Meanwhile, the Department for Business is making plans to support car manufacturers, including mitigating the impact of tariffs and investment in gigafactories to bolster the production of electric vehicle batteries.

Other contingency plans will see the mobilisation of more than 3,000 lorries a week to bring essential drugs and medical equipment into the UK after a deal was signed with four ferry firms.

A total of 1,100 extra customs and immigration officers will be manning the border by March, while 20 telephone helplines will provide advice to businesses.

A bespoke phone app for hauliers will keep lorries moving by directing drivers to the closest of seven new inland border checkpoints, while a “haulier handbook” on the changes has been translated into 13 languages.

While a Border Operations Centre is being manned around the clock by officials to limit hold-ups, and a Fish Export Service will issue “validated catch certificates” and technical support for the industry.

Navy gunboats have already been put on standby to protect British fishing waters.

The four 80m long patrol boats would have the power to halt, inspect and impound all EU fishing boats that stray into the UK’s exclusive economic zone.

The Department for Environment, Food and Rural Affairs has also launched a Fish Export Service to help streamline extra paperwork for fishermen and women who continue to export their catch to European markets.

The new system will provide technical support to the workers and help smooth any potential trade disruption resulting from no-deal.

On Wednesday, Downing Street will be holding a cross-Whitehall exercise called Operation Capstone, which will involve the three devolved administrations.

It will test a range of scenarios for no-deal, including border disruption, scrambling naval vessels to intercept EU trawlers fishing illegally in UK waters, and issues with the transfer of data between the UK and bloc.