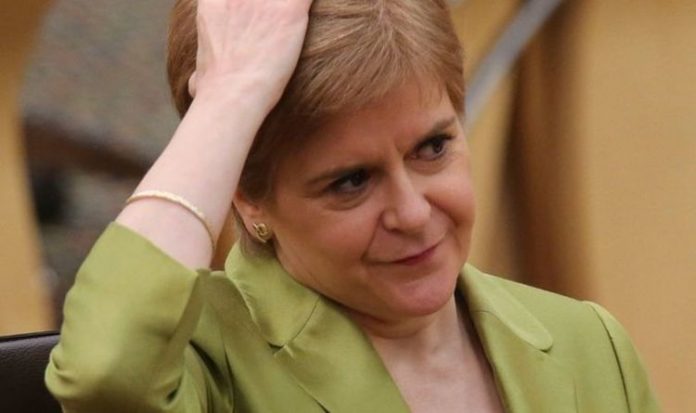 Scotland’s First Minister announced her controversial decision to keep the capital in Level 3 of her coronavirus tier system last week. But according to a leaked document seen by the Telegraph, medical chiefs recommended Ms Sturgeon place Edinburgh into Tier 2 after a “substantial improvement” in its COVID-19 figures.

The Scottish Government paper was created to provide “initial advice” ahead of last week’s review of Scotland’s restrictions.

It also said the capital’s test positivity rate had “likewise trended down” and its case forecast was seen as “now very low” with “low hospital forecast for NHS Lothian”.

The document concluded that NHS Lothian’s director of public health “recommendation is for a move to Level 2”.

The news of the leaked document has caused outrage among people living in Scotland.

“@NicolaSturgeon is the sole reason you remain stuck in Tier 3.

“Medical experts advised the FM to move Edinburgh to Tier 2 but she refused.

READ MORE: Sturgeon ‘to exploit no deal’ as SNP plots to defy No10 with vote

Another user reacted: “They don’t care if everyone is poor they will do anything for SNP handouts and get brainwashed that everything is Westminster’s fault.”

Last week, the Scottish Government reportedly published an edited version of the document and circulated it to the press amid Ms Sturgeon’s restrictions review announcement.

But the edited version did not include figures for each local authority and removed the public health officials’ recommendations.

Last week Ms Sturgeon said data suggested it would not be safe or sensible to ease restrictions in Edinburgh.

On Tuesday, in a statement Ms Sturgeon said: “We have also looked very carefully at whether Edinburgh should move to level 2 at this stage.

“Edinburgh is currently recording 68 cases per hundred thousand, which is below the Scotland-wide average. Its test positivity levels are also relatively low.

“However, cases in Edinburgh have risen slightly in recent days. There seems also to have been an increase in East Lothian and Midlothian.”

She added: “We have decided not to move Edinburgh to level 2 this week, but we will consider this again next week for both Edinburgh and Midlothian.”

The leaked document was issued to a group of hospitality business who last week failed to win a legal bid to get the Court of Session to suspend the First Minister’s decision, according to the Telegraph.

However, the group received the paper too late and judge Lord Ericht dismissed their petition for judicial review.