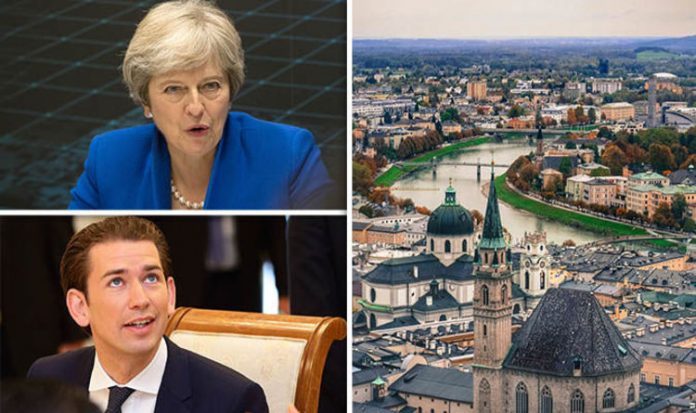 The leaders will come together for a two-day summit and with the UK just six months from leaving the EU, Prime Minister Theresa May will be deeply hopeful for meaningful discussions.

This meeting marks the first since Mrs May presented EU leaders with her now-infamous Chequers Brexit proposal, which she is still showing no sign of backing away from.

Mrs May called on the bloc to show “goodwill and determination” to avoid a disorderly Brexit and secure a close future partnership.

The EU has shown some signs of accepting the plan, saying it was a good start, but have baulked at proposals for a future customs arrangement and the Northern Ireland border, expected to be discussed in-depth in Salzburg.

Salzburg, Austria, is on the border of Germany, enjoying magnificent views of the Alps.

Various events throughout the summit will take place in different parts of the city, but the hub of it all is within the University of Salzburg.

What will EU leaders discuss?

Theresa May is expected to use the opportunity – including the dinner tonight without prying eyes of the media – to sell Chequers to her critics.

In a letter to leaders ahead of the summit, EU Council President Donald Tusk confirmed a special Brexit summit in November is likely.

He wrote: “We will discuss how to organise the final phase of the Brexit talks … including the possibility of calling another European Council in November.”

He added: “Unfortunately, a no deal scenario is still quite possible.

“But if we all act responsibly, we can avoid a catastrophe.”

This attitude is likely to buoy Mrs May, for whom the tight timeline to implement a deal is now in her favour, as EU leaders aren’t able to delay a decision much longer.

Added to this, following a meeting with Germany’s Angela Merkel and Austria’s Sebastian Kurz this week, Mr Kurz said everything possible must now be done to prevent a no-deal Brexit.

A key topic on the table, as has been the case for some time, is Northern Ireland.

One of the stickiest topics in negotiations is how to meet the UK and EU’s common aim of keeping an open border between the British province of Northern Ireland and EU member Ireland.

Earlier on Tuesday, EU negotiator Michel Barnier said the bloc was ready to improve its proposal for an “insurance policy” backstop arrangement on how to manage its Irish border.

Mrs May previously rejected a proposed plan on a backstop arrangement, saying it would undermine the integrity of the whole of the UK.

But Mrs May has also shown signs of flexibility on the subject, writing: “What we are proposing is a fair arrangement that will work for the EU’s economy as well as the UK’s, without undermining the single market.

“This would be balanced by a strong security relationship to keep all our citizens safe from threats at home and abroad.”

Brexit latest: Salzburg, Austria, is on the border of Germany (Image: Google Maps)

Deep divisions are developing within the EU on the topic of migration.

Last month, Italy threatened to withhold EU funds if Brussels didn’t step in and get migrants on the Diciotti rescue ship shared out across the bloc.

And Austria itself is at the forefront of the hard-line immigration voices, with its new government making migration a priority if its European Union presidency.

Peter Launsky-Tieffenthal, spokesman for the Austrian presidency, says they hope to see progress in Salzburg on the issue of strengthening Frontex, the European coast and border guard.