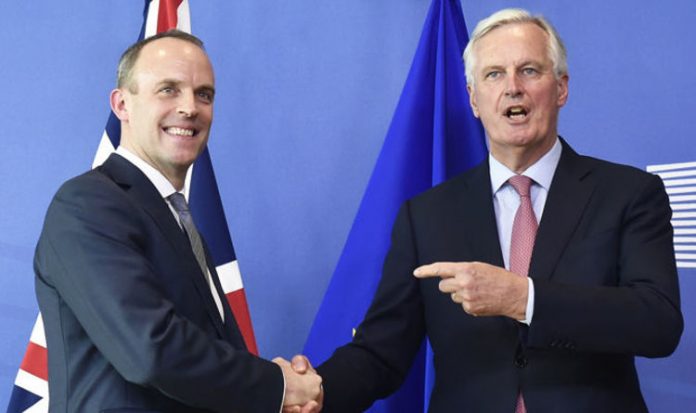 Mr Raab is expected to discuss a string of thorny issue related to Brexit including the future of the Irish border after the UK leaves the EU.

Both sides are hoping to agree on a divorce deal and a statement on future trading relations before an EU summit on October 17.

However, Mr Raab admitted on Tuesday that the October deadline might not be met.

The Cabinet minister told the House of Lords’ EU Committee there was a “possibility that it may creep beyond” that date.

Mr Barnier said on Wednesday that the EU was “prepared to offer Britain a partnership such as there has never been with any other third country”.

Follow the latest Brexit updates below with Express.co.uk’s live blog…

8:44am update: EU ‘giving May space to dump Chequers’

Theresa May is being given space to dump her Chequers deal by the EU, a close ally of David Davis has claimed.

Stewart Jackson, ex-chief of staff to Mr Davis when he was Brexit Secretary, said the Prime Minister would have to move back towards a hard Brexit.

He claimed Mrs May was being given space to do so by EU negotiators and French president Emmanuel Macron.

Mr Jackson added: “The difficulty for Chequers is it has not really got any friends.

“For the EU, it’s outside their core principles and undermines the integrity of the single market. I think there’s an understanding across the EU that that’s the case.

“In the UK, people believe it is Brexit in name only.”

7:40am update: Javid’s vow on immigration

Brexit will see the creation of an immigration system that “works in the best interest of the UK”, Home Secretary Sajid Javid has said.

Mr Javid made the comments as the Prime Minister signalled Britain will stand firm on its Brexit demands in talks with the EU.

The Home Secretary, in an exclusive interview with the Daily Express, said Brexit will ensure “we are in control of our own borders”.

He said: “After we leave the EU we will end free movement and put in place an immigration system which works in the best interest of the UK.

“We will ensure we are in control of our own borders but continue to attract those who bring significant benefits to the UK.”